It’s a busy Friday. Peace appears to be breaking out in the East, while leadership is still in needed in the West.

Mike Bloomberg writes for Bloomberg View this morning: “Theresa May’s government is still promising to quit Europe’s customs union when Brexit happens next year. The prime minister’s position is politically understandable, yet entirely indefensible. And it perfectly captures the bind Britain has gotten itself into.” Bloomberg View: Brexit Choice Between Bad and Worse

Mike appears to be on to something. Just reported: U.K.’s Worst Growth Since 2012 Sinks Pound on Rate Hike Doubts 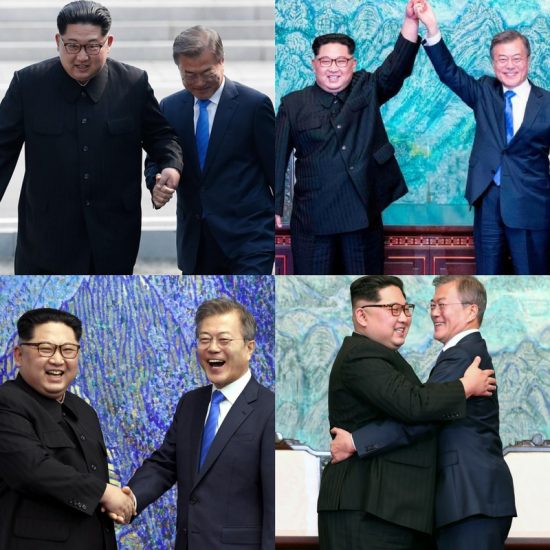 Celebrating the First Amendment: This Saturday, Bloomberg senior White House reporter Margaret Talev, who as President of the White House Correspondents Association (WHCA) will preside over the annual WHCA dinner in Washington where comedian and Daily Show correspondent Michelle Wolfe has the job of making Washington laugh while President Trump stays away. Earlier this month, Bloomberg’s Washington bureau hosted a celebration in honor of Talev’s tenure as White House Correspondents’ Association president where Talev underscored the value of a free press to democracy. For more: Read about Bloomberg’s reception and this profile of Michelle Wolf in the New York Times.

The German chancellor is meeting with President Trump today, in an 11th-hour attempt to avoid a U.S.-Europe trade battle. European leaders are feeling pessimistic about that. (After all, President Emmanuel Macron of France didn’t seem to manage it, and he’s a Trump favorite.) Can Angela Merkel Change Trump’s Mind on Trade?

Presidential Tweets of the Day.

@realDonaldTrump: “Please do not forget the great help that my good friend, President Xi of China, has given to the United States, particularly at the Border of North Korea. Without him it would have been a much longer, tougher, process!”

@realDonaldTrump: “KOREAN WAR TO END! The United States, and all of its GREAT people, should be very proud of what is now taking place in Korea!”

On Trump admitting on “Fox and Friends” that he hadn’t bought wife Melania a present for her birthday, but got her a “beautiful card”:

“How did Trump mess up the world’s easiest question?”
— Trevor Noah

“This is the question you don’t lie about?”

“You’re a billionaire! You got your wife a card? Do you know what she puts up with? I think she’s earned a shopping spree — I’m going to say around $130,000 worth.”
— Stephen Colbert

“Whoa, whoa, whoa, whoa! So part of the deal Kim Jong-un is making is to give up the test site that he already destroyed? I didn’t realize that ‘Art of the Deal’ was translated into Korean. That’s a slick move.”
— Trevor Noah

On Trump admitting his personal lawyer, Michael Cohen, was representing him in his dealings with the adult-film actress Stephanie Clifford:

“Man, you picture prosecutors digging for evidence. Now all they need is a remote control. I bet this morning one of them said, ‘Hey, should I print out the brief?’ and another one said, ‘No, let’s hold off, he’s on TV, I’ll bet he’s going to say something.’”
— Seth Meyers

President Trump gave his first interview in months Thursday morning on “Fox and Friends,” weighing in on topics from Ronny Jackson to Michael Cohen and Stormy Daniels to James Comey to Kanye West.

FOX & FRIENDS: He joins us now by phone. Thank you so much for being with us, Mr. President.

FOX & FRIENDS : All right. Hopefully, they’ll be visits in between, but have you decided on or do you want to tell us what you got her?

TRUMP: Well, I better not get into that, because I may get in trouble. Maybe I didn’t get her so much. I’ll tell you what. She has done — I got her a beautiful card. You know, I’m very busy —