Twitter wars with Congress, the media, Amazon, and his “Justice” Department make me less nervous. But this does: China said it would counter U.S. protectionism “to the end, and at any cost,” as a war of words over Trump’s proposed tariffs on Chinese imports escalated. America is now at odds with China, Russia, Europe, and our neighbors to the north and the south.

We are now not only a country at war with ourselves, but the rest of the world as well. As has been written “We are locked in a battle of wills that (has) no possible winner, only a different order of losing.”

Most Read on the Bloomberg Terminal:
China Vows to Fight Trump Tariffs ‘To the End’ As Tensions Rise (Bloomberg)

Smart Takes on Tariffs: Governing by Bluffing: With President Trump’s announcement yesterday that he’s considering $100 billion more tariffs on Chinese goods, he created confusion within his administration and abroad because of a negotiating style you could call “governing by bluffing.” This is how he has lived his whole life: promising big things, and creating on-the-edge, “Apprentice”-style drama — then changing his mind. How Trump Governs by Bluffing (Axios – Mike Allen and Jonathan Swan)

By the Numbers: China Has the Cards to Play Trump’s Bluff (Bloomberg Gadfly – David Fickling) 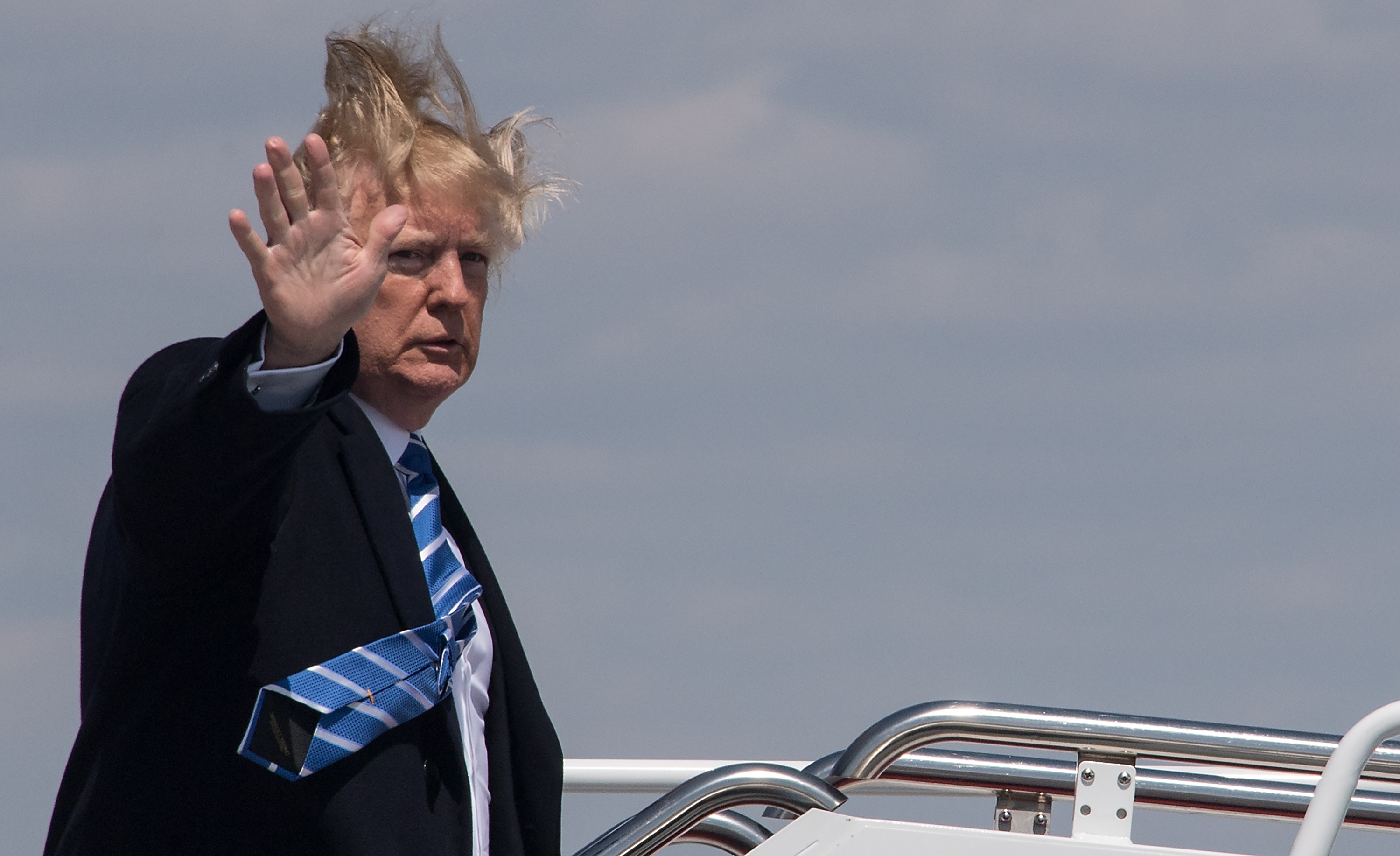 US President Donald Trump boards Air Force One on a windy day at Andrews Air Force base on April 5, 2018 near Washington, DC. (Nicholas Kamm/AFP/Getty Images)

Governing by Fox News: Trump aides sometimes plot to have guests make points on Fox News that they have been unable to get the president to agree to in person. “He will listen more when it is on TV,” a senior administration official said. Trump’s Must-See TV: Judge Jeanine’s Show and Her Positive Take on the President (Washington Post)

Populism Watch: Hungary’s election on Sunday is gearing up to be a bellwether for populism in Europe. While Prime Minister Viktor Orban’s Fidesz party has a wide lead in opinion polls, the surveys may be misjudging sentiment given what happened in the 2016 U.S. elections and the U.K.’s Brexit vote. Orban’s efforts to overhaul courts, take control of state media and let oligarchs dominate the economy may have damaged his political brand. A poll this week showed a plurality of Hungarians want him out. Why Hungary’s Vote is No Cakewalk for Orban This Time (Bloomberg Balance of Power)

CityLab: What Mayors Want: Mayors across the U.S. are taking matters into their own hands, and are increasingly focused on issues like climate change, immigration, and infrastructure that have traditionally fallen to federal and state governments. Bloomberg Philanthropies is out with a comprehensive survey of mayors and city managers from 156 big and small cities in the U.S. Key Findings: More than half think Airbnb, Lyft and Uber have significantly reconfigured their cities, mostly for good. And two-thirds say infrastructure is a top problem.

NY Metro Section: New York Commuter Counties Top List for Highest Property Taxes (Bloomberg)
Of all the costs of living in the New York City area, one is particularly inescapable — and the pain is about to get worse, thanks to the federal tax overhaul. “There’s a bullseye on New York City and surrounding counties,” Daren Blomquist, a senior vice president at the real estate analytics firm. “Some folks are going to want to sell and there could be weaker demand for some homes in those areas as well.”

Innovation Today: Institutional Investor named Bloomberg’s Philip Cenatiempo to the magazine’s “Trading Tech 40” list of the top leaders in trading technology. Phil made his debut at #9 and the magazine pointed to his work spearheading innovation across Bloomberg. Read more here.

Bloomberg (Brazil): Brazilian Judge Orders Arrest of Former President Lula: Has until 5pm Friday to hand himself into authorities

“Trump just keeps moving staffers around. It’s like he’s rearranging deck chairs on the Titanic, after it already sunk. He moved John Kelly to chief of staff, Ronny Jackson to veteran affairs, now he wants to move Pruitt to attorney general. Our only hope is that he gets carried away and accidentally replaces himself.”
— Seth Meyers

“I read that Trump will take his first tour to Latin America next week. The following week Trump will return for his apology tour.”
— Jimmy Fallon

“Trump is going down there for the Summit of the Americas. When he saw it on his schedule, Trump was like, ‘Wait, there’s more than one America? What is this?’”
— Jimmy Fallon

“I saw that Australia is now launching an investigation into Facebook. This is very interesting: In Australia, Facebook’s stock actually goes down the toilet in a counterclockwise direction.”
— Jimmy Fallon