Another day, another day of guns in America.

Today’s edition is dedicated to the lives impacted by gun violence and is meant to be a guide for what you can do to help.

Just under four years ago, a minority of the U.S. Senate blocked legislation to require comprehensive gun background checks despite near-unanimous public support. It was then that Mike Bloomberg wrote a $50 million dollar check to launch a new organization to unite millions of Americans who will work together to end gun violence and counter the Washington gun lobby: Everytown for Gun Safety. (everytown.org)

Today, that work is more important than ever. Learn more. Get involved.

Bloomberg View’s editorial board says: The End of Gun Massacres Begins With You; A Radical Fringe Can Only Dictate Policy if the Rest of Us Allow It 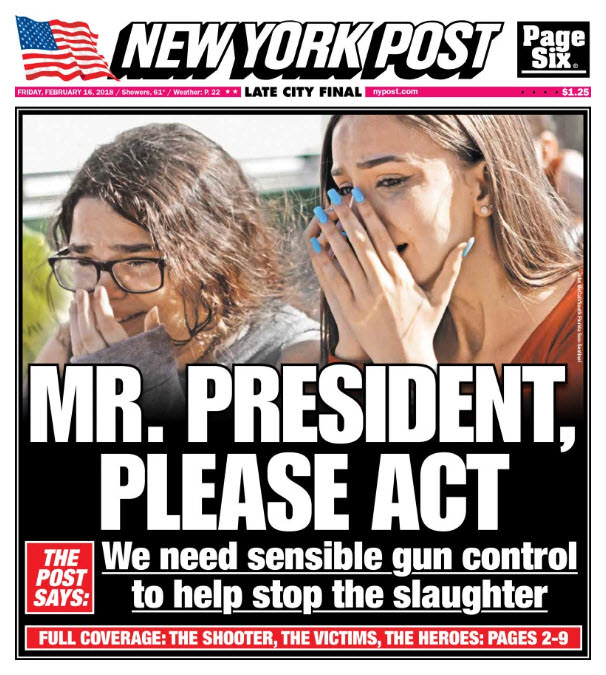 Students Call for Action: “Blood is being spilled on the floors of American classrooms, and that is not acceptable” David Hogg, a senior at Marjory Stoneman Douglas High School in Parkland, Fla., said Thursday in an interview. “By working through bipartisanship and working through our differences . . . we can make an actual change. And who knows? Maybe we could save some children’s lives.” A Loud, New Voice After the Latest School Shooting: Kids Wanting to Know Why Adults Hadn’t Done More (Washington Post)

Not Standing Still: Everytown for Gun Safety Launches Post-Florida Action Plan (Politico) The five points of the plan are: Pledge to vote on gun safety; research how much money local officials have accepted from the National Rifle Association, register friends to vote; force candidates to go on the record about gun policy through a provided candidate questionnaire; and urge people who are involved to run for office themselves.

From Late Night: Read Jimmy Kimmel’s emotional monologue that begs Trump to address gun control. “Children are being murdered,” Kimmel said, getting choked up as he addressed President Trump with a plea to address gun control. “Do something! We still haven’t even talked about it. You still haven’t done anything about it. You’ve literally done nothing.” (Washington Post)

Tweets of the Day.

@MikeBloomberg: Smarter gun laws that keep us safer are possible – but only if we get involved and speak out: http://mikebloom.bg/2EvePHZ

@MikeBloomberg: We must demand our government act to protect its citizens. Text ACT to 644-33 to join a local event with @Everytown & @MomsDemand and the millions of Americans demanding common-sense solutions to the gun violence crisis.

Thanks to @morsea for the feedback and thorough coverage of the Florida school shooting.

From Ronan Farrow in The New Yorker reports on one woman’s account of clandestine meetings, financial transactions, and legal pacts designed to hide an extramarital affair. Donald Trump’s System for Concealing Infidelity (The New Yorker)

Happy New Year to our readers celebrating with family and friends this weekend.

Here’s the venerable Richard Vines on five food customs you should know for the Lunar New Year. (Bloomberg)