The Trade Wars have begun: Trump fired the biggest shot yet in the war by imposing tariffs on $34B of Chinese imports, prompting China to retaliate with tariffs of its own. As one economist told Bloomberg, “There is no obvious end to this.”

Trump’s embattled head of the Environmental Protection Agency (EPA) who was the subject of unending ethics scandals and more than a dozen investigations has resigned. He has been replaced by Andrew Wheeler, a former coal lobbyist who also worked for Oklahoma Senator James Inhofe who famously carried a snowball on the Senate floor to dispute the impact of climate change. (I dare he try that this summer.)

World Cup Weekend: England faces Sweden at 3pm (UK time) tomorrow. If England wins, it’s possible they could play Russia in the next round on Wednesday setting up a modern day Cold War match.

The last big match between England and Russia in 2016 saw epic riots in Marseille between hooligans from both nations:

You want a piece of this? 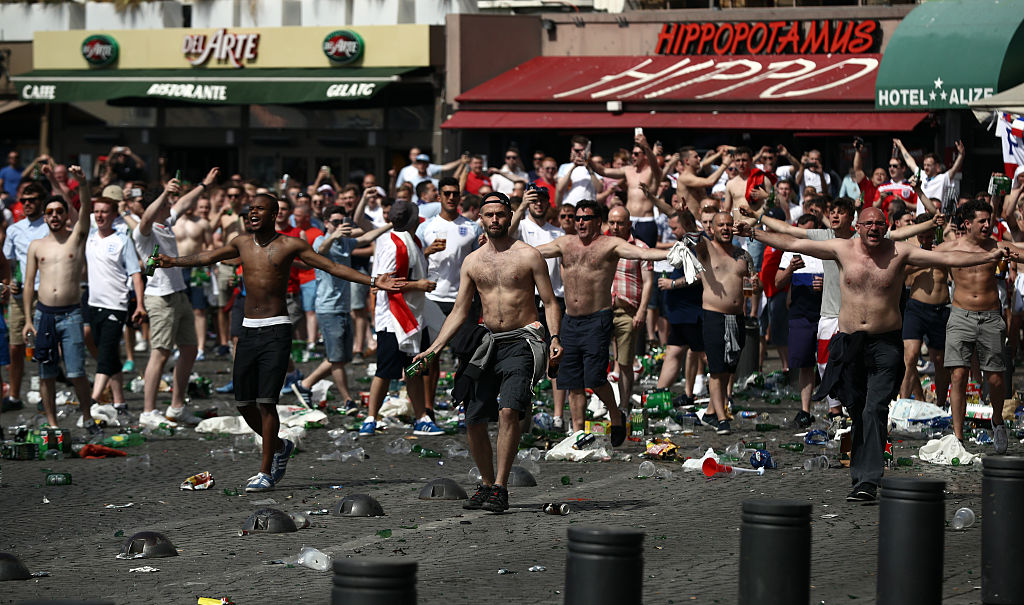 England fans throw bottles and clash with Russian fans and police ahead of the game against Russia on June 11, 2016 in Marseille, France. (Photo by Carl Court/Getty Images)

Meanwhile, in other wars: Theresa May Heads Into Cabinet War Over Her Brexit Plan (Bloomberg)

Trump in London next week: London Will See Two Trumps: The President and a Balloon Parody (Bloomberg)

Times of India: Indian IT Companies Take Less than 12% of U.S. H-1B Visas

Bloomberg’s European headquarters was named ‘City of London Building of the Year’ by the Worshipful Company of Chartered Architects in recognition of its contribution to the Square Mile this week. The project also received the highest recognition in the ‘Offices’ category at New London Architecture’s prestigious annual ceremony at the Guildhall, attended by Mayor of London Sadiq Khan.

London: Art Night 2018, sponsored by Bloomberg Philanthropies and curated by the Hayward Gallery, runs from 6PM Saturday July 7 to 6AM Sunday. Find out more here.

New York: MOMA PS1’s Warm Up is on Saturday in the PS1 courtyard around the Hide & Seek exhibit, which won the Bloomberg Philanthropies-sponsored 2018 Young Architects Program.

Best of late night from the U.K.

The U.K. is not a nation that has a collective spirit of having won much lately.

For those who want to see how British sports commentators reacted to England winning it’s fourth round World Cup match, this video is simply too good to miss: