Today marks one year since President Trump withdrew the U.S. from the Paris Agreement, and Mike Bloomberg has announced a new $70 million effort to help the U.S. achieve the goals of the climate pact.

The American Cities Climate Challenge is an unprecedented opportunity for 20 U.S. cities to dramatically accelerate their efforts to tackle climate change. The 100 largest cities in the U.S. are invited to apply for technical assistance and support packages valued at more than $2 million per city, with 20 winners to be announced in October.

Why this matters: Globally, cities account for about 70 percent of carbon emissions, and the 100 largest U.S. cities are responsible for as much carbon emissions as 181 coal-fired power plants. U.S. mayors have control over the biggest sources of emissions – specifically building and transportation sectors. Together, these two sectors typically total over 90 percent of citywide emissions.

Mayors aren’t waiting for Washington: Since June 2017 when the U.S. turned its back on the Paris Agreement, mayors from more than 450 cities representing more than 70 million Americans signed Americas Pledge aiming to keep the country’s commitment to the goals of the climate pact. 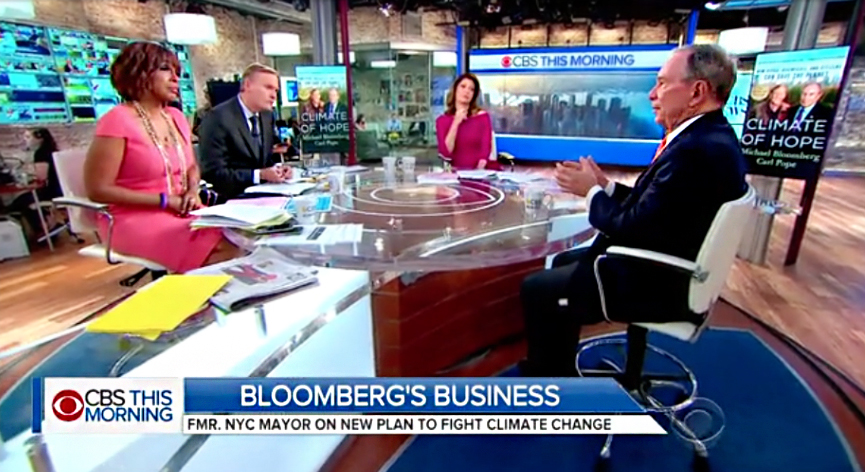 Read more: A year after Trump announced US exit from Paris deal, a coalition fights to fill the gap (The Guardian)

ALSO THIS WEEK: A New Commitment to Education: Mike Bloomberg on Thursday announced a new five-year, $375 million commitment to improving education in America supporting leaders who are willing to try innovative approaches to ensure students are better prepared to enter either college or the workforce after high school.

Read an adaptation of his remarks:
The False Choice That Holds Our Kids Back
(Michael Bloomberg)

Focus on Trade: America’s Allies Lose It Over Trump’s Tariffs.
For U.S. allies frustrated with President Donald Trump’s “America First” policy, his decision to slap tariffs on imported metals from Europe, Canada and Mexico on national security grounds may have been the final straw. Canada’s normally affable premier, Justin Trudeau, said the measures were “totally unacceptable” and retaliated with tariffs on $12.8 billion of U.S. goods. “We have to believe that at some point their common sense will prevail,” he lamented. (Bloomberg Politics)

Spanish Prime Minister Mariano Rajoy was ousted by a no-confidence vote in Parliament today, overwhelmed by the drumbeat of corruption revelations that has grown throughout his seven years in office. Rajoy Falls, Paying Price for Generation of Corruption in Spain (Bloomberg)

Italy’s Populists Surge to Power in Challenge to Europe (Bloomberg)

Don’t Forget! Today is National Gun Violence Prevention Day. Join the movement by wearing orange this weekend or visit Everytown for Gun Safety’s website to find out how you can participate.

@Schwarzenegger: Look at the scoreboard, Mr. President. Instead of giving us advice, maybe you should learn from us. We don’t believe going backwards makes anyone great, but we do believe in winning. 2017 US GDP Growth: 2.3%, Your “Huge” Goal: 3%, 2017 CA GDP Growth: 4.9%: California economy vastly outpaces U.S.

Trevor Noah took on Kim Kardashian’s visit to the White House this week:

“I know what some of you are thinking: I can’t believe this reality star moron is in the Oval office, but don’t forget – he was elected by the American people, so show some respect!”

“Honestly I’m not surprised to see Kim Kardashian meeting with Donald Trump, these two have so much in common: they’re both reality stars, they’re both big on social media, Kanye West loves both of them, they both believe in employing everyone in their family, no matter how useless they are. So, it makes sense!”

— Trevor Noah on The Daily Show

Dunkin Donuts, Krispy Kreme Doughnuts, LaMar’s Donuts, Duck Donuts, and many other shops and convenience stores are giving away free doughnuts on June 1 to celebrate National Donut Day 2018—or National Doughnut Day 2018, if you prefer the original spelling of “doughnut.”

Where To Get Free Donuts Today