Tomorrow is St. Patrick’s Day and today Mike Bloomberg welcomes the Irish Prime Minister Leo Varadkar for lunch at Bloomberg in NY. Varadkar is the first Irish PM of Indian descent, the first openly gay, and, at 38 years old, the youngest. He has come to embody the liberalisation of a country which was once regarded as one of the most socially conservative in Europe. So, as the U.S. appears to be returning to the 1950’s, the Irish — of all people (my people) — are charging into the current century. No talk of a wall between north and south in his country.

Most Read on the Terminal (Last 8 Hours): Bonus Drought Over as Deutsche Bank Tries to Keep Best Talent

More Trump breakups, Vanessa and H.R. McMaster head for the door: Apparently, all four have been living apart for some time. Donald Trump Jr.’s wife is filing for divorce (Page Six); Trump is removing H.R. McMaster as his national security adviser (Washington Post)

COLD WAR: Ask your parents what it felt like in the 1970s. Americans have not seen Russian threats at this scale since the days of Brezhnev. The difference today is the U.S. and Russia appear to be attacking each other directly – with cyber weapons.

Mueller “has subpoenaed the Trump Organization … to turn over documents, including some related to Russia,” per the New York Times.

“The Trump administration slapped Moscow with its first sanctions for meddling in the 2016 presidential campaign,” per the Wall Street Journal.

Yesterday, the leading analyst report on the financial data market was released and it shows Bloomberg L.P. continues to perform well in an increasingly competitive market. The global market for financial data grew more than 3.5% in 2017 to $28.5 billion, and we remain the market share leader with 33% of the market, followed by Thomson Reuters with 23%. Additionally, the report shows that industry-wide spending is growing fastest on Pricing, Reference and Valuation data feeds, often driven by regulatory requirements. Learn more about the Burton-Taylor report. 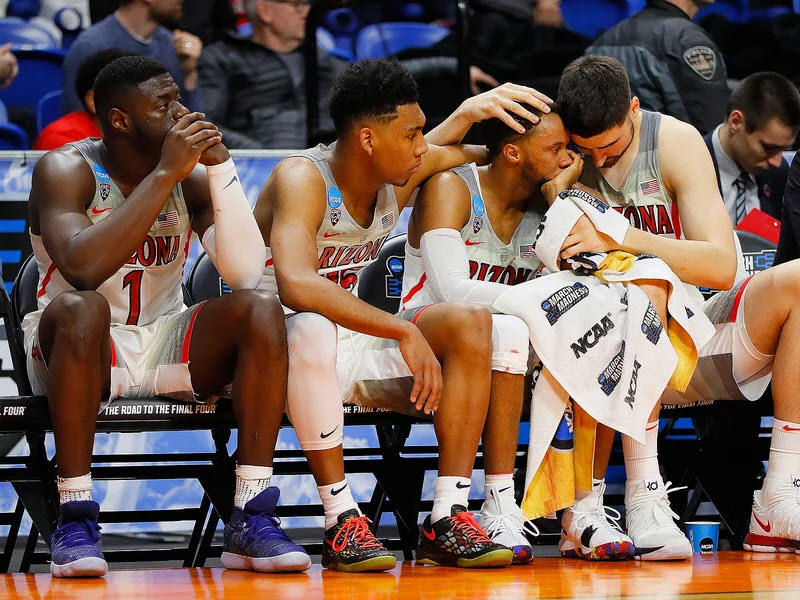 The Agony of Defeat: The first day of March Madness saw two big upsets, as No. 13 Buffalo trounced No. 4 Arizona, 89-68, and No. 11 Loyola-Chicago shocked No. 6 Miami on a 3-pointer at the buzzer.
(
Kevin C Cox/Getty Images)

The U.K.’s largest lenders face tougher capital demands in this year’s stress test, as the Bank of England steps up efforts to avert a repeat of the financial crisis. U.K.’s Biggest Banks Face Higher Capital Hurdles in Stress Test (Bloomberg)

Equity and derivatives trading was delayed on the day of a landmark stock debut in Germany due to a technical glitch, Deutsche Boerse AG said. Exchange Glitch Delays German Stocks, Futures on Day of Big IPO (Bloomberg)

Li Ka-shing, a wartime refugee who used to sweep factory floors in Hong Kong for a living, retired after a career spanning more than half a century amassing one of Asia’s biggest fortunes from building skyscrapers to selling soap bars. Hong Kong’s Richest Man Li Ka-shing Retires (Bloomberg)

@PressSec: Just spoke to @POTUS and Gen. H.R. McMaster – contrary to reports they have a good working relationship and there are no changes at the NSC.

Der Spiegel: The Two Women at the Top: Inside the Relationship Between Berlin’s Uncertain New Allies

Times of India: More than half of PM Modi and Rahul’s Twitter followers are fake

“Donald Trump surprisingly hasn’t tweeted about the subpoena yet. Probably because he doesn’t know how to spell the word ‘subpoena.’” — JIMMY KIMMEL