Most Read on the Bloomberg Terminal:
Trump Says Trade Wars are ‘Easy to Win’ as Tariff Anger Spreads (Bloomberg)

Brexit Tests: U.K. Prime Minister Theresa May delivers a crucial speech today on her vision for relations after Brexit. She will pledge that leaving the European Union won’t destroy jobs as she prepares for crunch trade talks with Brussels while trying to hold together warring factions within her governing Conservative party. May Vows Brexit Deal Won’t Hurt Jobs (Bloomberg) 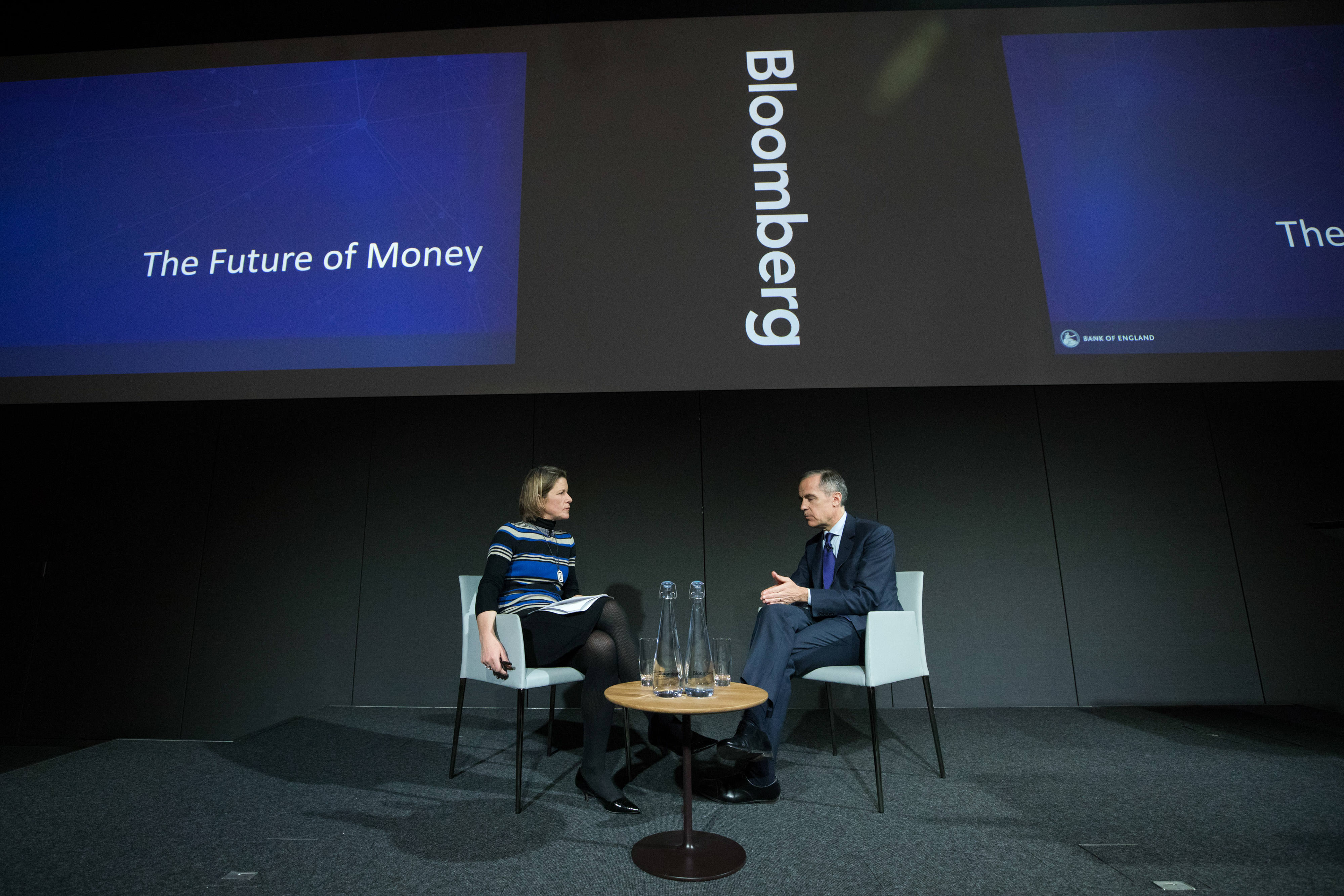 In a speech today at Bloomberg’s European headquarters in London, Bank of England Governor Mark Carney called for greater regulation to bring the era of cryptocurrency “anarchy” to an end. “The time has come to hold the crypto-asset ecosystem to the same standards as the rest of the financial system,” he said. BOE”s Carney Calls for Rules to End Cryptocurrency Anarchy (Bloomberg) 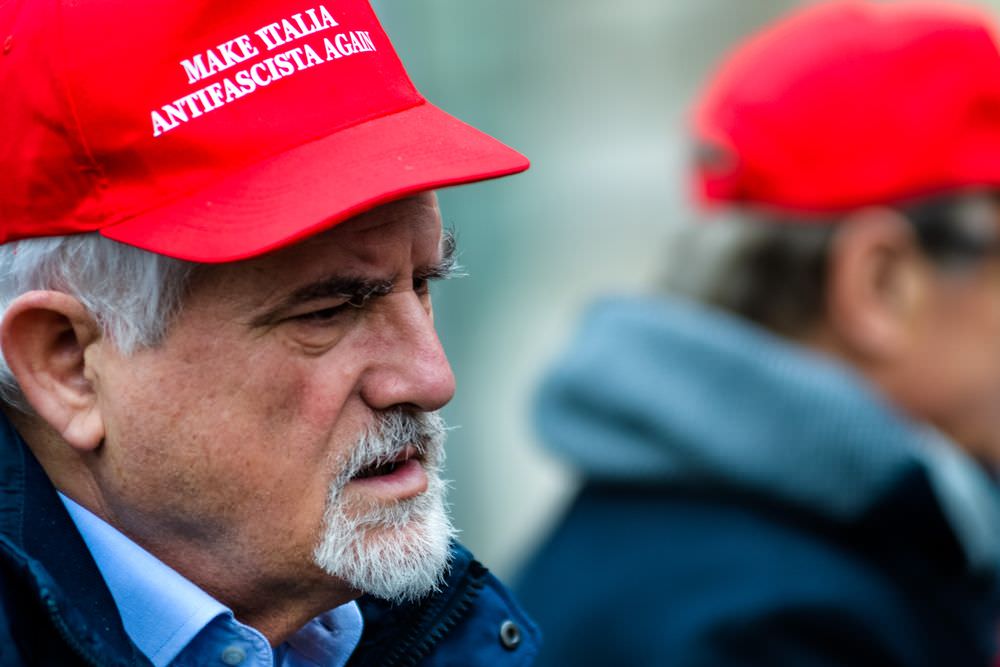 In advance of Sunday’s election, Italians have a new take on the famous red hats. Photographer: Michele Spatari/NurPhoto via Getty Images

Italian Elections: Sunday’s election is forecast to produce a hung parliament, threatening weeks of political uncertainty for an economy already burdened by a feeble recovery and a public debt mountain. Four possible scenarios for what might transpire, including a populist pact and a chance of gridlock that may unsettle markets.

For a preview, read Jonathan Bernstein’s interview with Florence-based political scientist Hans Noel.
Why Italy’s Election is Such a Mess (Bloomberg View)

An avalanche of editorials today about Jarvanka: Are their days numbered?

Intrigue in the House of Trump: The power the president gave his daughter and son-in-law upended a basic principle of American democracy and is sowing chaos in his administration.

Climate Update: Watch Colorado Governor Hickenlooper at the Climate Leadership Conference in Denver call out America’s Pledge for its climate leadership in the absence of U.S. action: “We were proud to come out and support America’s Pledge, I appreciate all that Bloomberg Philanthropies has done on this – at this point now there are 20 states, 110 cities, 1400 businesses, and I feel the momentum is just beginning.” Climate Leadership Conference – Denver (YouTube)

And the nominees are…: Chinese film investors have more riding on the Academy Awards than usual this Sunday: two nominees for best picture. “Darkest Hour” and “Phantom Thread” are financed in part by Beijing-based Perfect World Co. through a $500 million deal with Universal Pictures. The two films are short-listed for a total of 12 awards in nine categories. China Has A Lot Riding on This Year’s Oscars (Bloomberg)

Here are the nominees. (Oscars.org)

@MikeBloomberg: Glad to catch up with colleagues at the @Bloomberg Frankfurt office today – keep up the hard work.

@MikeBloomberg: From batteries to fuel cells to 3D printing, @Heraeus R&D is developing innovative solutions that can make a positive impact around the world. Thanks to Chairman Dr. Jürgen Heraeus and the team for today’s tour of the Hanau headquarters.

@realDonaldTrump: “Manufacturing in U.S. Expands at Fastest Pace Since May 2004” — Bloomberg

THE PRESIDENT on Twitter at 5:42 a.m.: “Alex Baldwin, whose dieing mediocre career was saved by his impersonation of me on SNL, now says playing DJT was agony for him. Alex, it was also agony for those who were forced to watch. You were terrible. Bring back Darrell Hammond, much funnier and a far greater talent!”

@realDonaldTrump: Alec Baldwin, whose dying mediocre career was saved by his terrible impersonation of me on SNL, now says playing me was agony. Alec, it was agony for those who were forced to watch. Bring back Darrell Hammond, funnier and a far greater talent!

Comedians had a field day with the latest drama from the White House.

“CNN summed it up this way: ‘White House meltdown on full display.’ Well, the White House tours must be getting really interesting. ‘O.K., now we’re passing the Lincoln Bedroom. On your right, you’ll see John Kelly suffocating Jared Kushner with a pillow, and on your left, you’ll see the claw marks on the wall left by Steve Bannon as they dragged him to the curb.’”
— Stephen Colbert

“McMaster found himself in a little hot water with Trump last month when he told a German audience that Russian meddling in the election was ‘incontrovertible,’ which violated Trump’s policies against acknowledging Russian interference and of using big words. ‘Look, just say, ‘Sad!’ O.K., fancy pants?’”
— Stephen Colbert

“Actually, Hicks said that she resigned to pursue other opportunities. It’s a pretty tough job market out there — she’s got to compete against all those other unemployed Trump communications directors.”
— Jimmy Fallon