TGIF. It’s been a long week but Friday is finally here. Tomorrow is a day to enjoy as Prince Harry and Meghan Markle tie the knot. (I’m pretty sure Robin is getting up at 4am EST to tune in to the spectacle on NBC.)

This news story has all the makings of a Hallmark holiday princess movie: an American Princess-to-be, a bad boy Prince, a family out to sabotage the romance, villains (the British tabloids) all around them, and perhaps a fairy-tale ending. In a surprise move, Prince Charles will walk Meghan Markle down the aisle. The royal wedding had been clouded by unpleasant tabloid fodder about the bride’s father staging photos and then being hospitalized. But in one gallant move, the heir to the British throne saves the day. The monarchy has had its share of ups and downs. At times seen as out of touch. But not tomorrow at least. Grab a pint and some scones and enjoy the weekend.

Windsor Prepares for the Royal Wedding. 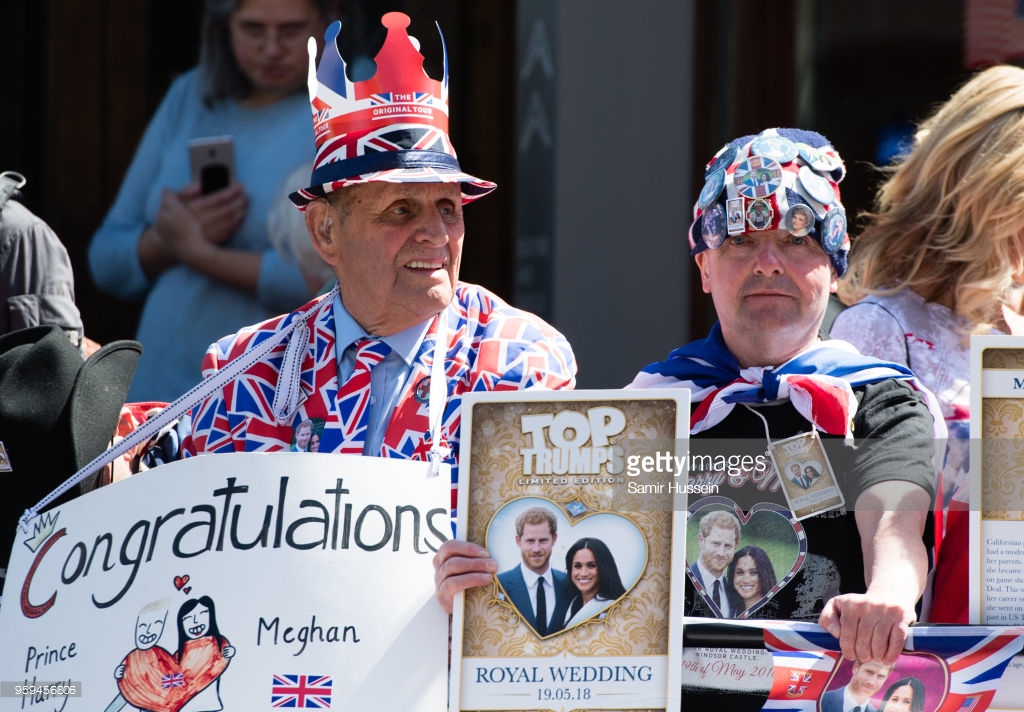 Royal fans gather outside Windsor Castle on May 17, 2018 in Windsor, England. Preparations continue in the town for the wedding between Prince Harry and Ms. Meghan Markle on May 19, 2018 when tens of thousands of well wishers will descend on the town just west of London to celebrate the couple’s big day. (Photo by Samir Hussein/Samir Hussein/WireImage)​

Prince Charles to Walk Meghan Down the Aisle (BBC News)

Confusion swirled around the U.S.-China trade talks. China’s foreign ministry isn’t aware of any offer to reduce its trade surplus with the U.S. by $200 billion a year, a spokesman said. A U.S. official had said China put that on the table during talks in Washington. Still, one thing China did do was end an anti-dumping probe of U.S. sorghum.

Nafta’s in trouble too: The U.S., Canada and Mexico are “nowhere near” a deal, trade envoy Robert Lighthizer said, citing “gaping differences” on everything from intellectual property to rules of origin. The comments punctured optimism generated by remarks from Canada’s Justin Trudeau. U.S. Dashes Hopes for Quick Nafta Deal Amid ‘Gaping’ Differences (Bloomberg)

Economist Cover Editorial: Gaza: There Is a Better Way

Who gets put straight through to President Trump? The list reportedly includes Steve Schwarzman, Rupert Murdoch and Sean Hannity. Donald Trump and Sean Hannity Like to Talk Before Bedtime (New York magazine)

Elon Musk Pitches 10-Minute Tunnel Ride from Dodger Stadium to LAX (Bloomberg)
Musk brought his vision of a high-speed transportation system underneath sprawling and traffic-clogged Los Angeles to an overwhelmingly supportive crowd at a hearing for local residents.

Watch remarkable videos on how it works here or on Elon Musk’s Instagram here.

Fun internet viewing after you’ve overdosed on the Royal Wedding: Armada of Saildrones Could Conquer the Ocean

Who knew this White House had a sense of humor?! Give credit where credit is due and enjoy their latest tweet. Is it Yanny or Laurel?

“Today marks the one-year anniversary of special counsel Robert Mueller’s Russia investigation, and this morning Donald Trump marked the occasion by tweeting. When Melania saw the tweet, she was like, ‘Oh, so you are capable of remembering anniversaries?’”
–James Corden

“The White House announced today that President Trump would donate his first quarter’s salary to the Department of Veterans Affairs. It’s just a little less money than he’s given to veterans of his affairs.”
–Seth Meyers

For more Best of Late Night from the New York Times click here.