In a rare full-page editorial, today’s New York Times says: The President is Not Above the Law (New York Times) 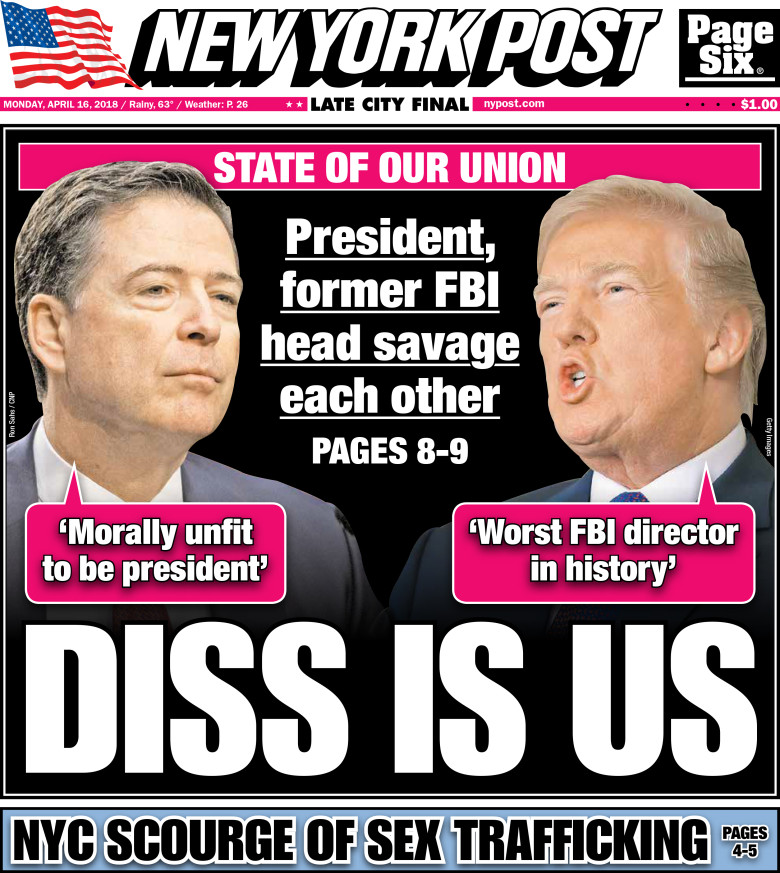 How 105 Missiles Show Assad’s Future is Safe (Bloomberg – Balance of Power)
The weekend attack by the U.S., Britain and France destroyed military positions and research facilities linked to chemical weapons. But it did little to degrade Bashar Al-Assad’s capacity to wage war, or target the fighters from Russia, Iran and Hezbollah supporting him.

China’s Economy Brushes Aside Trump to Power Ahead in 2018 (Bloomberg)
According to the median estimate of economists in a Bloomberg News survey, China’s growth maintained a 6.8 percent pace, well ahead of a target for about 6.5 percent expansion this year. In a report due out tomorrow in Beijing, the Chinese economy is expected to have tuned out all the background noise of trade wars, debt mountains and regulatory crackdowns and powered ahead in the first quarter.

South China Morning Post: Why China’s US trade stand-off is not a replay of Japan’s in the 1980s

The Moscow Times: Nearly 90% of Russians are unwilling to protest, poll says

Presidential tweeting from the weekend.

@realDonaldTrump: Slippery James Comey, a man who always ends up badly and out of whack (he is not smart!), will go down as the WORST FBI Director in history, by far!

@realDonaldTrump: Attorney Client privilege is now a thing of the past. I have many (too many!) lawyers and they are probably wondering when their offices, and even homes, are going to be raided with everything, including their phones and computers, taken. All lawyers are deflated and concerned!

@realDonaldTrump: I never asked Comey for Personal Loyalty. I hardly even knew this guy. Just another of his many lies. His “memos” are self serving and FAKE!

@realDonaldTrump: The Syrian raid was so perfectly carried out, with such precision, that the only way the Fake News Media could demean was by my use of the term “Mission Accomplished.” I knew they would seize on this but felt it is such a great Military term, it should be brought back. Use often!

@realDonaldTrump: Comey throws AG Lynch “under the bus!” Why can’t we all find out what happened on the tarmac in the back of the plane with Wild Bill and Lynch? Was she promised a Supreme Court seat, or AG, in order to lay off Hillary. No golf and grandkids talk (give us all a break)!