Good morning from NYC where spring has finally arrived. It’s William Shakespeare’s birthday: he would be 454 years old today.

Mike Bloomberg appeared on CBS Face the Nation on Sunday to announce how he is helping the U.S. keep it’s commitment to the Paris climate accord. Shortly afterwards, UN Secretary General Antonio Guterres tweeted that he was grateful for Mike’s “global leadership on climate action.”

Mike also answered the question: is he running for President. Face the Nation host Margaret Brennan concluded the piece this way: “Michael Bloomberg ruling out a run for office, sort of.”

Breaking news photo of the day. 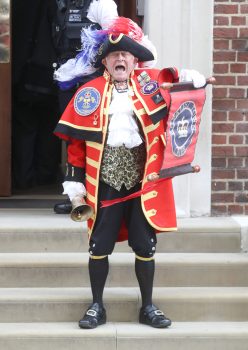 A town crier announces the birth of Catherine, Duchess of Cambridge and Prince William, Duke of Cambridge’s son outside St Mary’s Hospital on April 23, 2018 in London, England. The Duchess safely delivered a son at 11:01 am GMT, who will be fifth in line to the throne. (Photo by Chris Jackson/Getty Images)

Europe in Washington This Week: It’s a big week for European diplomacy with the continent’s most powerful leaders heading to Washington to try to salvage the Iran nuclear deal and avert a global trade war. Macron arrives today for a three-day state visit and Merkel meets U.S. President Donald Trump on Friday looking to ram home the argument.

Trade Optimism: Steve Mnuchin hinted at a trade truce with China, saying he’s “cautiously optimistic” about reaching a deal and is mulling a trip to Beijing. Trade dominated the IMF Spring Meetings in Washington. (Bloomberg Daybreak)

Travel Ban Test: Fifteen months after Donald Trump’s first travel ban set the in-your-face tone for his presidency, the controversy finally comes before the Supreme Court in a showdown over the limits of the president’s power to control who enters the country. Travel Ban Fight at High Court to Test Presidential Power (Bloomberg – Balance of Power)

What Happened: The New York Times reporter who covered Hillary Clinton’s campaign from before it started to the very last moment reflects on her experience in her new book, ‘Chasing Hillary.’ Here’s an excerpt: ‘They Were Never Going to Let Me Be President’ (New York Times)

First from Bloomberg: Amazon Has a Top-Secret Plan to Build Home Robots (Bloomberg)
The retail and cloud computing giant has embarked on an ambitious, top-secret plan to build a domestic robot, according to people familiar with the plans. The project is Codenamed “Vesta,” after the Roman goddess of the hearth, home and family.

The Japan Times: Japan and Canada vow to maintain pressure on North Korea

“The guy who’s really sweating it out these days is Michael Cohen, Trump’s criminal lawyer. And when I say criminal lawyer I mean a lawyer who is criminal.”
— Bill Maher