Secunda said the U.S. Virgin Islands is showing the rest of the region “a clear pathway” to rebuilding its energy grid in a cleaner, stronger way after a natural disaster like the 2017 hurricanes. The use of solar energy in the Virgin Islands, he said, is a blueprint and an opportunity to accelerate the region’s transition into renewable energy.

Clinton said: “I’m so grateful to this Bloomberg Recovery Team because of all the impressive work they’ve done and their relentless focus on it. This is a huge deal. The Virgin Islands could be the first place in the entire Caribbean to do what every place in the Caribbean should do, which is to maximize the lowest cost, higher return, most environmentally responsible and most sustainable form of energy.” 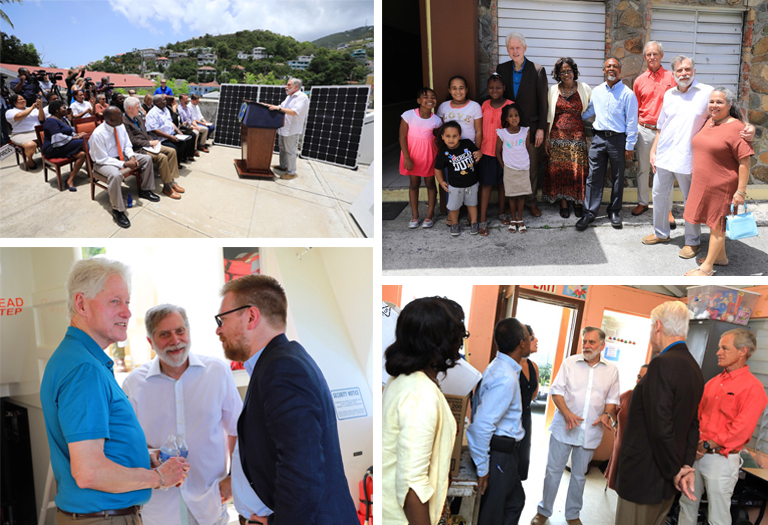 The mass shooting at a South Florida high school earlier this year refocused those seeking changes to gun laws. Many of the people in attendance joined after the shooting in Parkland. That surge led to the largest turnout ever for the event, organizers said, which drew keynote speeches Friday from Bloomberg and actress and gun-safety advocate Julianne Moore.

In his keynote address, Mike Bloomberg said: “The American people have always favored common-sense gun safety regulations – but that isn’t enough. We need to elect candidates who will support them. I’ve never seen more energy than we have right now. The ‘gun sense’ movement is stronger and more effective than ever, and communities are safer from the threat of gun violence.”

Thursday:
-Brexit talks between the EU and the U.K. resume in Brussels. The EU is signaling it wants to make September a decisive month in the divorce negotiations, while U.K. Prime Minister Theresa May favors a late-fall deadline.

“This July was the hottest month ever in California’s history. In Death Valley, they recorded the hottest temperature ever anywhere on earth. The smoke from our fires has now reached New York. That should tell you something; even the smoke won’t stop in fly-over states.”
— Real Time with Bill Maher

“In business news, the shoe company Crocs is closing down all of their manufacturing facilities. You can tell the company was in rough shape when the CEO started wearing Crocs.”
— Jimmy Fallon

“The oldest living married couple have been married for 80 years. When asked what the secret was for staying happy, the couple said ‘we can’t hear each other’.”
— Jimmy Fallon