Most Read on the Terminal (Last 8 Hours): From a $126 Million Bonus to Jail: The Fall of a Star Trader

FROM RUSSIA WITH LOVE: Boris Johnson is expected in Brussels today to lobby for European support in response to the Russian nerve agent attack in Salisbury. However, Vladimir Putin blatantly couldn’t care less, after declaring an overwhelming victory in yesterday’s Russian presidential election (POLITICO). Putin’s spokesman trolled the U.K., telling reporters the turnout was “much higher than we expected” as Russians rallied around the president. “So I would like to thank the U.K. for helping us with this high turnout, which we ourselves could not have dreamed of,” the spokesman said. U.K. Eyes Next Move After Claim of Russian Nerve Agent Stockpile (Bloomberg)

MUELLER MELTDOWN: President Trump’s attacks on Robert Mueller this weekend signaled he may be preparing to end the special counsel’s investigation (or he’s just cranky) into alleged Russian meddling. The few Republicans who commented on Trump’s accusations of political bias warned against such a move, without saying what they’d do if he acts. Most Republicans Silent in Face of Trump’s Attacks on Mueller (Bloomberg)

ON TOUR: Saudi Arabian Crown Prince Mohammed bin Salman arrives in Washington on a grand tour of the U.S. seeking to burnish his credentials as a decisive reformer. He’ll meet Trump tomorrow. He spoke to Norah O’Donnell for ’60 Minutes’ on Sunday. Coming to America: The Saudi Prince’s Charm Offensive (Bloomberg)

MARCH FOR OUR LIVES: Tony and Grammy Award Winners Lin-Manuel Miranda and Ben Platt have collaborated to release “Found/Tonight,”a gorgeous mashup of songs from “Hamilton: The Musical” and “Dear Evan Hansen” (Listen here). A portion of the proceeds will support this upcoming weekend’s March For Our Lives initiative. In total, 819 marches — 725 in the U.S. and 94 abroad — will take place, according to Everytown for Gun Safety, which was founded and funded by Michael Bloomberg. Scoop: Saturday gun marches will blanket U.S. (Axios) 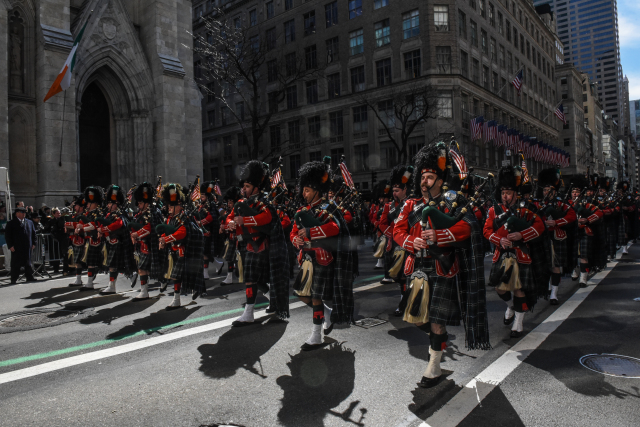 Bloomberg L.P.’s headquarters at 731 Lexington Avenue has been certified by the Center for Active Design (CfAD) with a Fitwel 3 Star Rating, the system’s highest achievement level. Read our Press Release.

After a record 15-year tenure in which he steered the nation through global crises, overhauled monetary policy tools and oversaw the elevation of the yuan to reserve-currency status, People’s Bank of China Governor Zhou Xiaochuan is riding into the sunset. The other side of Zhou’s legacy is debt. Years of financial repression where low lending rates were subsidized by poor returns for savers helped fuel the rampant growth in corporate debt that authorities are now seeking to contain. Chinese Central Bank’s Departing Chief Leaves a Legacy of Reform and Debt (Bloomberg)

Learn more about Zhou Xiaochuan’s successor, the 60-year-old Yi Gang, who boasts more than two decades of experience in the central bank he will now run. U.S.-Trained Technocrat, Not a Powerbroker, Will Lead China’s Central Bank (Bloomberg)

Brexit Secretary David Davis and chief EU negotiator Michel Barnier meet in Brussels to thrash out an agreement on the transition period before a key summit on Thursday and Friday. EU, U.K. Said to Agree to Transition Deal: Brexit Update (Bloomberg)

The data analytics firm that worked with Donald Trump’s election team and the winning Brexit campaign harvested millions of Facebook profiles of U.S. voters and used them to build a powerful software program to predict and influence choices at the ballot box. Revealed: 50 Million Facebook profiles harvested for Cambridge Analytica in Major data breach (The Guardian)

Tune into the Bloomberg Ideas event in San Francisco today and tomorrow. This first-of-its kind discussion features Bloomberg thinkers and writers, engaging in an extended conversation on three topics central to the tech industry: regulatory grey areas (3/19 @ 5-8 PM EDT), the economics of AI (3/20 @ 12-3 PM EDT), and startups and capital markets (3/20 @ 4-7 PM EDT). These discussions will be livestreamed on Bloomberg View’s Facebook page, Twitter and on the Terminal.

Times of India: India may move WTO against US on duty hike

The Independent Online (Africa): US gives EU until May 12 to ‘fix terrible flaws’ of nuclear deal

@RealDonaldTrump: The Mueller probe should never have been started in that there was no collusion and there was no crime. It was based on fraudulent activities and a Fake Dossier paid for by Crooked Hillary and the DNC, and improperly used in FISA COURT for surveillance of my campaign. WITCH HUNT!

@SenJohnMcCain: Special Counsel Mueller has served our country with honesty and integrity. It’s critical he be allowed to complete a thorough investigation into Russia’s interference in the 2016 election — unimpeded.

@BenSPLATT: Honored to team up with @Lin_Manuel on “Found/Tonight,” a gorgeous mashup of @HamiltonMusical and @DearEvanHansen arranged by the great @LacketyLac. Proceeds go to the incredible #MarchForOurLives Initiative, so stream & download & listen! #GunControlNow

@Lin_Manuel: And to @joshgad, who reached out immediately after Parkland and asked what we could do. This is for him, and for the kids. ❤❤❤

ICYMI: The Late Late Show’s James Corden pokes fun at the Mueller investigation into Trump, teams up with Shaggy to update “It Wasn’t Me.”