Saudis Intercept Biggest Missile Barrage Yet from Yemen War (Bloomberg)
Saudi Arabia said it intercepted seven ballistic missiles fired late Sunday at the capital, Riyadh, and other cities by Houthi forces in Yemen. The barrage coincides with the third anniversary of Saudi intervention in Yemen and the timing, during the crown prince’s U.S. visit, may serve Saudi aims.

TV Last Night: Stormy Daniels told CBS 60 Minutes that she stayed silent about Donald Trump because she feared for her safety and told Anderson Cooper that she received a threat in a Las Vegas parking lot while with her infant daughter in 2011. “A guy walked up on me and said to me, ‘Leave Trump alone. Forget the story,” she said in the interview. “He leaned round and looked at my daughter and said, ‘That’s a beautiful little girl, it would be a shame if something happened to her mom.’” Watch the interview and read the transcript here.

IMF’s Lagarde Urges Euro Powers to Build Unified Capital Market: Christine Lagarde stopped by Bloomberg’s Berlin bureau today to talk with Bloomberg Television’s Francine Lacqua after Lagarde delivered a speech that called on Germany and France to spur further euro-area integration. “If these two countries can set their minds to reforming the euro area … then there would be real hope to move forward,” Lagarde told Lacqua. (Bloomberg)

The March for our Lives. 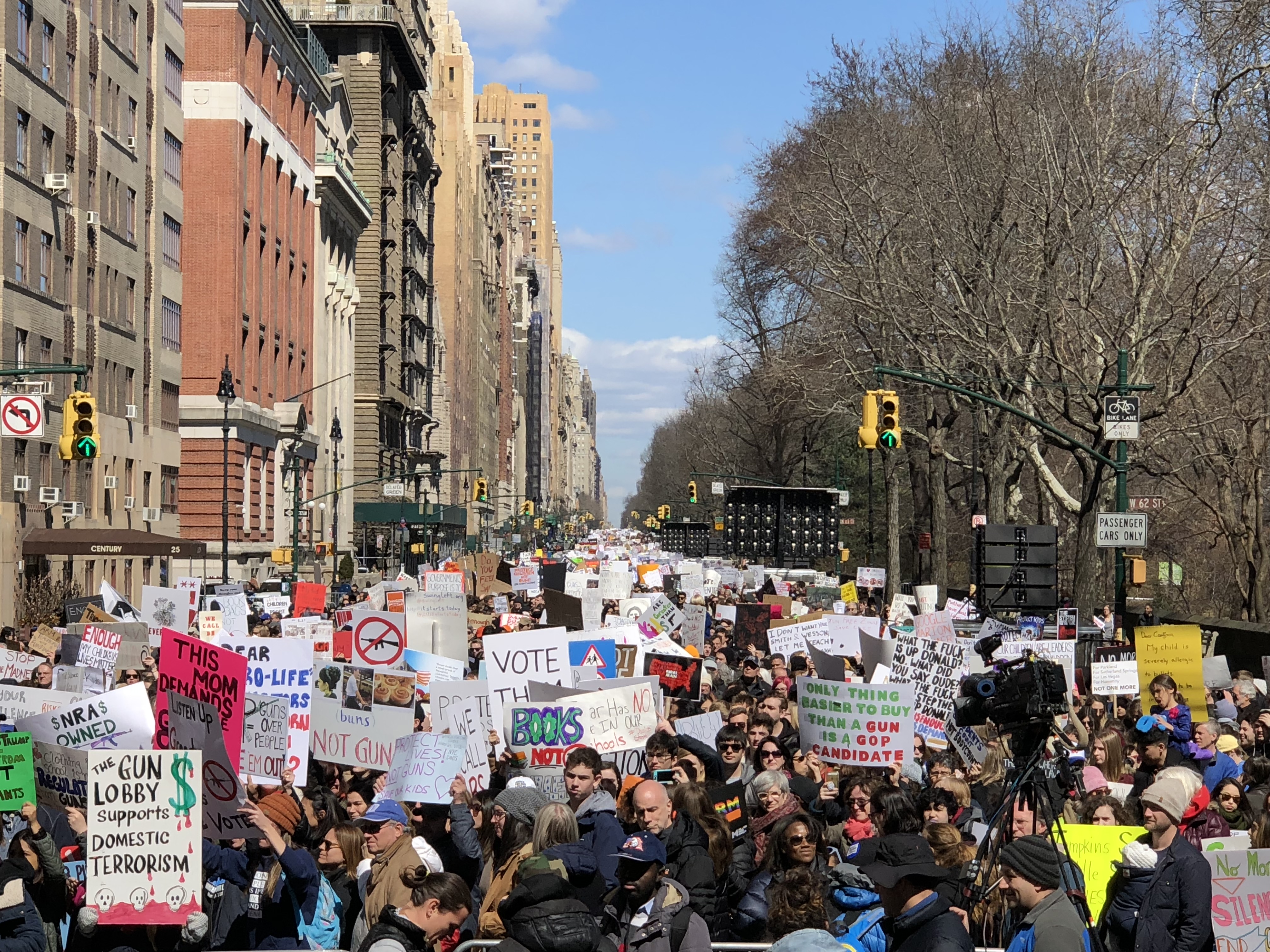 The March for our Lives in New York City stretched more than 20 blocks up Central Park West on Saturday, March 24, 2018. Hundreds of thousands marched globally for gun safety.

Momentum for Gun Safety: Early estimates show that, in addition to the flagship March for Our Lives event in Washington, D.C. on Saturday, more than 1.7 million students, gun violence survivors, gun-safety advocates and concerned citizens participated in 750 sibling marches across the U.S., inspired by the students of Marjory Stoneman Douglas High School in Parkland, FL. Everytown for Gun Safety, the group founded and funded by Mike Bloomberg, helped students plan and coordinate the sibling events, which totaled 850 worldwide.

And if you watch nothing else, watch Parkland student Emma Gonzalez lead an emotional moment of silence at the event in Washington, D.C. 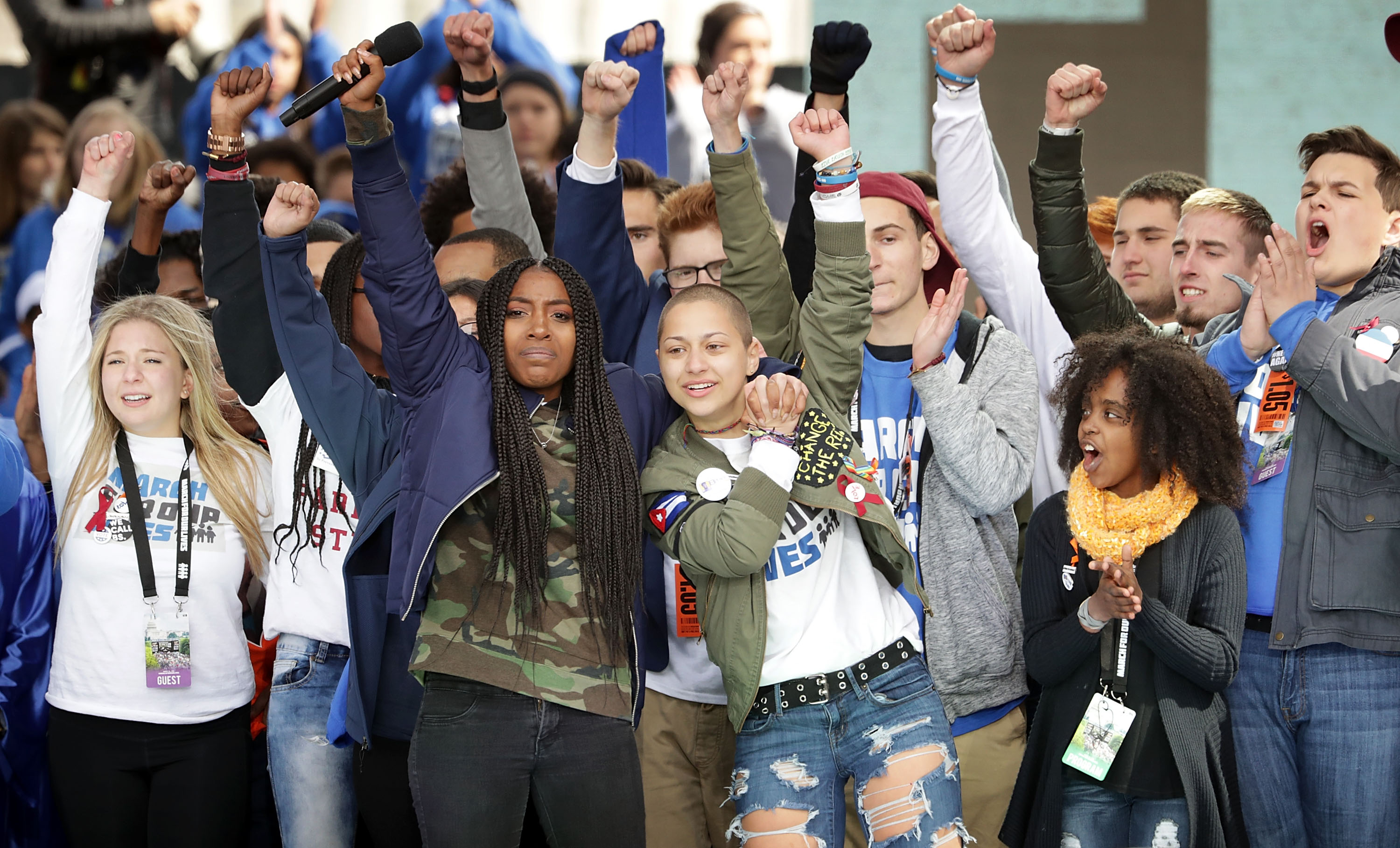 Students from Parkland, Florida’s Marjory Stoneman Douglas High School, including Emma Gonzalez (center), stand together on stage with other young victims of gun violence at the conclusion of the March for Our Lives rally on March 24, 2018 in Washington, D.C. (Photo by Chip Somodevilla/Getty Images)

“This is serious people, Facebook got caught sharing private data with people who were using it to help elect Donald Trump, and users say this is the worst thing to happen on Facebook since their mom sent them a friend request.”
— Bill Maher

“Everyone is p*ssed off at Facebook, right? We may have to go back to boring each other face to face.”
— Bill Maher