Bonjour from Paris, the City of Lights. Sadly a bit dimmer over the weekend as an attacker shouted “Allahu Akbar” as he stabbed five people with a knife in a busy area popular with tourists. In politics this week, France is urging Europe to push back against the US withdrawal from the Iran deal.

It’s another busy week: The US moves its embassy from Tel Aviv to Jerusalem today prompting protests that have turned deadly in Gaza. Special Counsel Bob Mueller celebrates an anniversary this week as his investigation marks one year in operation. And tomorrow, the senior economic advisor to China’s President Xi arrives in DC for talks.

Lastly, everyone could learn something from Mike Bloomberg’s commencement speech at Rice University on Saturday where he spoke of an “Honor Code for Life.”

Quote of the Day from the speech: “The greatest threat to American democracy isn’t communism, jihadism or any other external force or foreign power. It’s our own willingness to tolerate dishonesty in service of party, and in pursuit of power.” 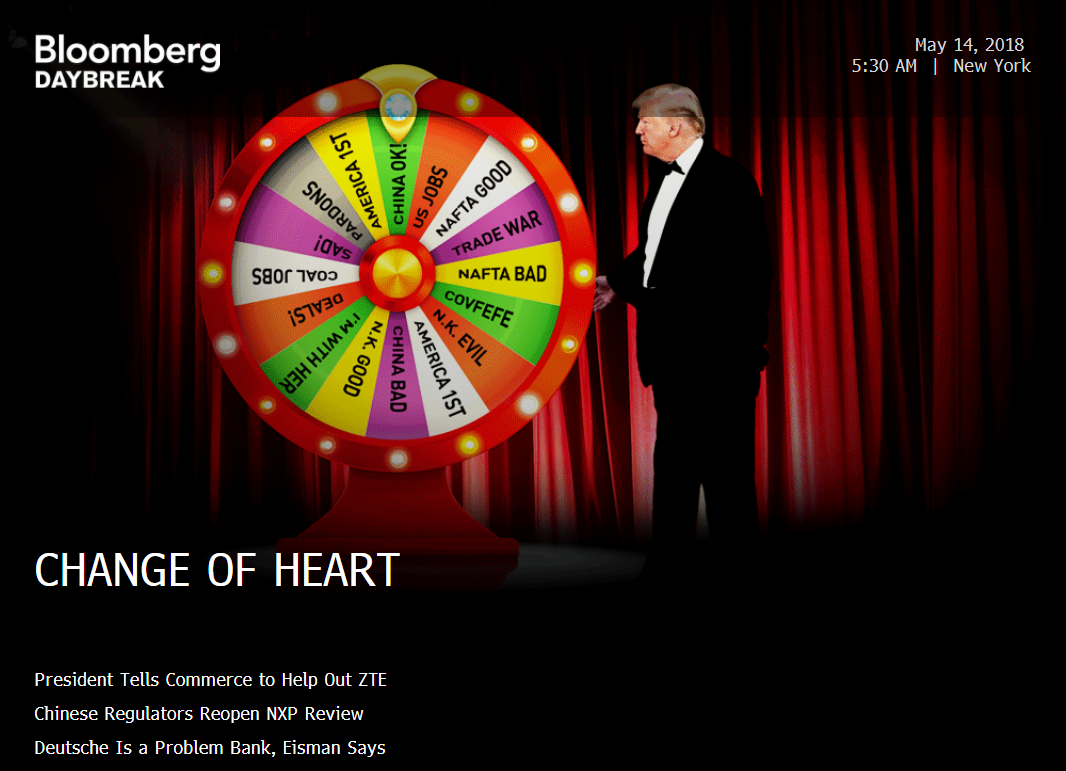 President Trump threw a lifeline to ZTE, the Chinese telecom company on the brink of failure after being banned from buying U.S. parts. Trump said in a tweet he and Xi Jinping are working to give ZTE “a way to get back into business, fast.” It’s not clear what he got in return, but people familiar said Chinese regulators reopened a review of Qualcomm’s bid for NXP. (Bloomberg Daybreak)

@realDonaldTrump: China and the United States are working well together on trade, but past negotiations have been so one sided in favor of China, for so many years, that it is hard for them to make a deal that benefits both countries. But be cool, it will all work out! 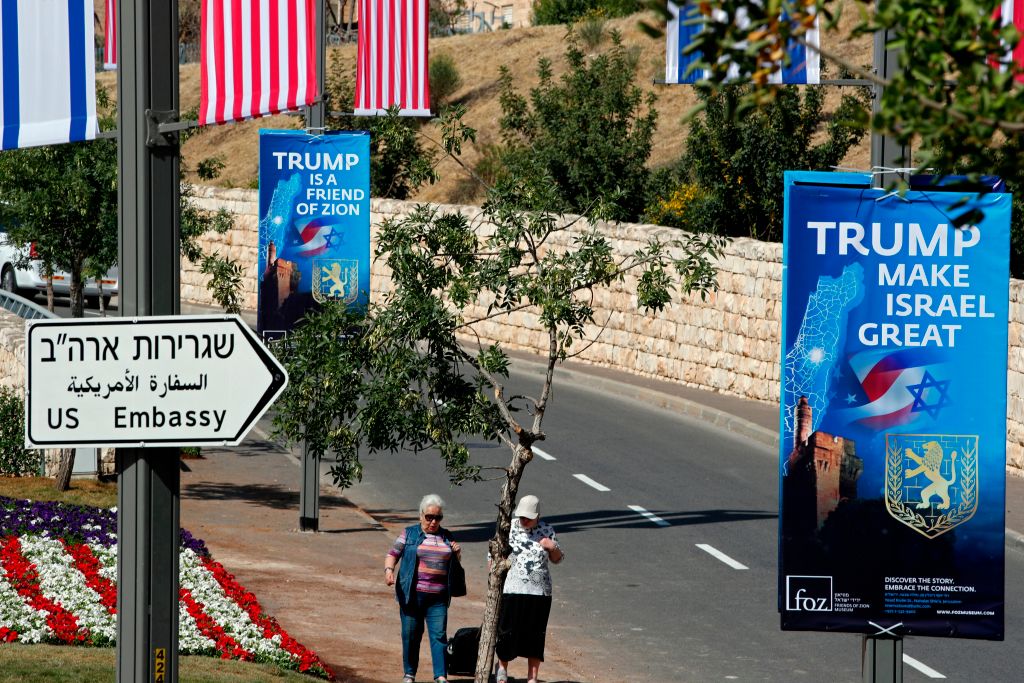 People walk near the compound of the US consulate in Jerusalem, which will host the new US embassy, as posters praising the US president hang in the street. (May 11, 2018 – Photo by Thomas Coex/AFP/Getty Images)

Gaza Protests: Dozens Killed Ahead of US Embassy Opening In Jerusalem (BBC News)

Panic and Terror in Paris: ‘He Approached Calmly’ (France 24) 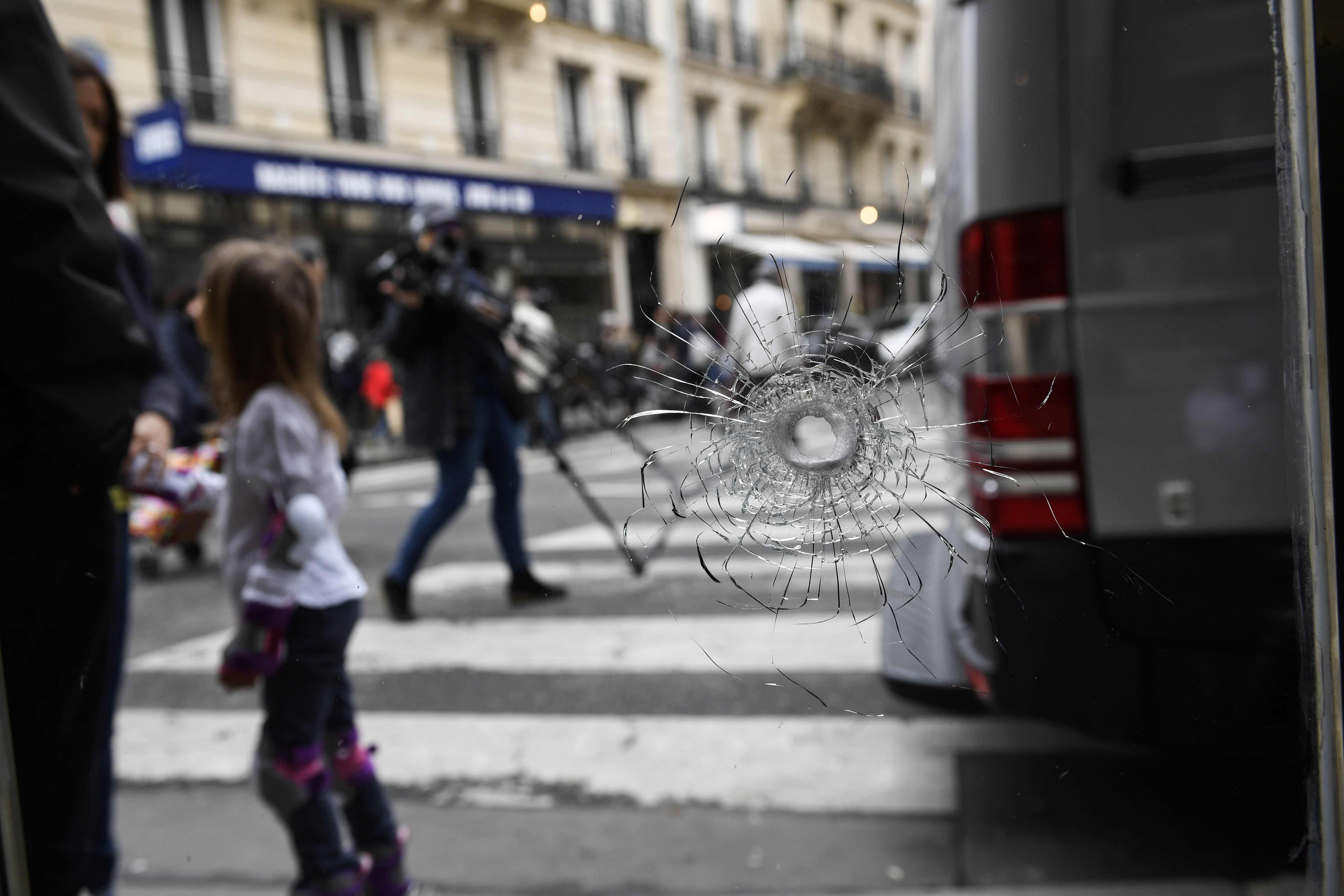 A bullet hole, seen on the window of a cafe located at the crossroads between the streets Saint-Augustin and Monsigny on May 13, 2018 in the Paris Opera district, the day after a knifeman killed one man and wounded four other people. (Photo by Eric Feferberg/AFP/Getty Images)

Facebook Expands in San Francisco, Will Lease Space at Park Tower (San Francisco Chronicle)
Facebook is on the verge of nearly tripling its office space in San Francisco as it prepares to sign a lease for up to 750,000 square feet at the 43-story Park Tower. Once signed, it will be the biggest lease of the year in San Francisco, slightly larger than Dropbox’s 736,000-square-foot deal earlier this year.

Elon Musk Outlines Plan to Get Into the Brick-Making Business (Bloomberg)
Elon Musk tweeted out plans for yet another side venture: alleviating the nation’s housing crisis. “The Boring Company will be using dirt from tunnel digging to create bricks for low-cost housing,” he wrote in a tweet about his tunneling enterprise.

The Guardian: London mayor launches scheme to get women into senior jobs

Times of India: Why Facebook, Google are hiring people to watch ads

Bloomberg: Indonesia Under Pressure to Pass Anti-Terror Law After Attacks

On Trump attorney Michael Cohen’s company, Essential Consulting, which is under investigation for selling access to the President:

“This is just bizarre because I naturally assumed that you gain access to the president by finding a golden ticket in your MAGA hat.”
–John Oliver

“The name of the slush fund was Essential Consultants. It’s a great name because there was only one of them, they weren’t essential, and they did no consulting.”
— Bill Maher