Good morning from London where it was reported overnight that Donald Trump plans to visit the UK capital in July. (God Save the Queen!)

Macron wrapped up his State Visit to DC with a rousing speech that appealed to America’s better self. Zuck is smiling this morning. Despite all the ruckus over privacy, Facebook reported record earnings, up 49% from the previous year, and there are now 1.45 billion daily users.

And lastly, all hail King James! LeBron James hit a three-pointer at the buzzer to give the Cavs a one game lead over the Pacers in the playoffs. He finished the game with 44 points, 10 rebounds, and 8 assists.

Let’s get to the news. 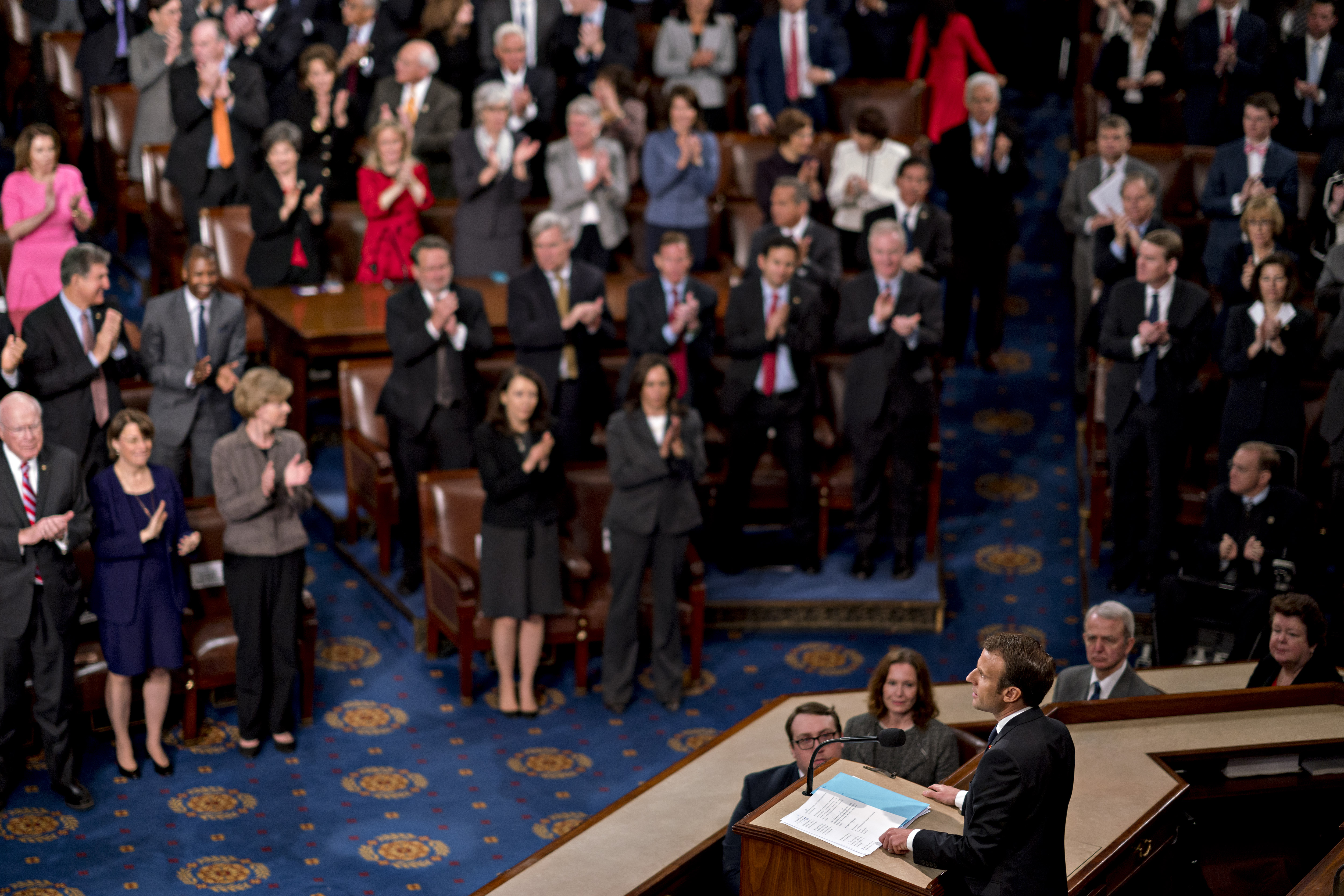 Emmanuel Macron speaks to a joint meeting of Congress at the U.S. Capitol in Washington, D.C., on April 25, 2018. Photographer: Andrew Harrer/Bloomberg via Getty Images.

Headlines:
Macron: U.S. Will Come Back to Paris Climate Pact (The Hill)
Macron Says He Thinks Trump Will Pull Out of Iran Nuclear Deal (Bloomberg)

Taking the Fifth: Trump’s long-time lawyer Michael Cohen said yesterday he will assert his constitutional right not to testify in a lawsuit brought by adult-film star Stormy Daniels to avoid the risk of incriminating himself in a separate criminal probe. Michael Cohen to Assert 5th Amendment in Stormy Daniels Lawsuit (Bloomberg)

Bloomberg Businessweek Cover: YouTube’s Plan to Clean Up the Mess that Made it Rich 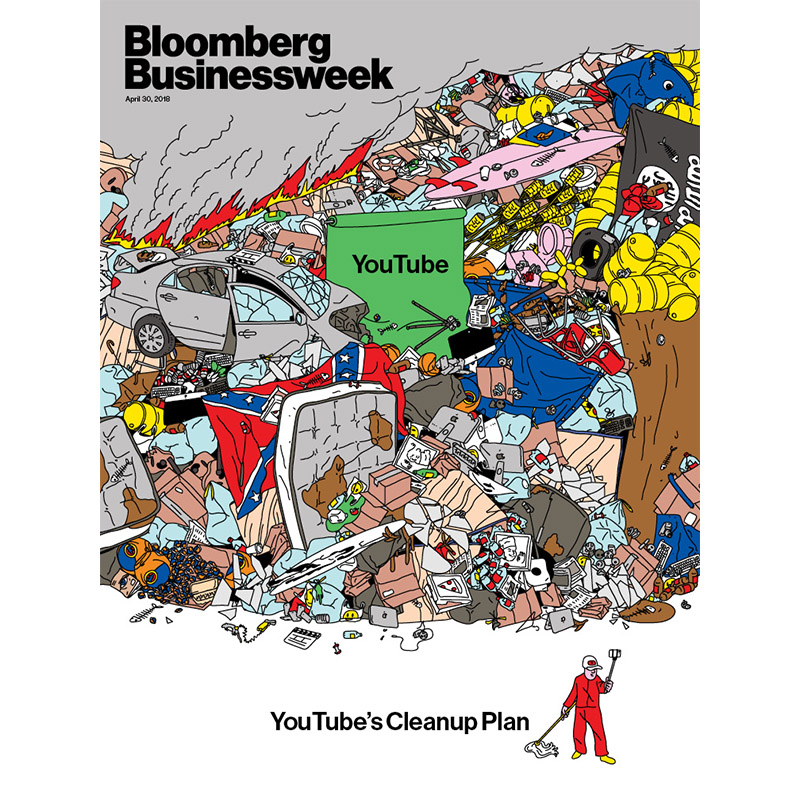 U.S. Tax Confusion: In a Senate Finance Committee hearing Tuesday, U.S. Senator Claire McCaskill (D – Missouri) held up a Bloomberg Businessweek graphic that details the massive confusion around the new U.S. tax laws and what businesses qualify for pass-through tax deductions. She asked that the graphic be entered into the official Congressional Record. (Watch here at marker 1:56). 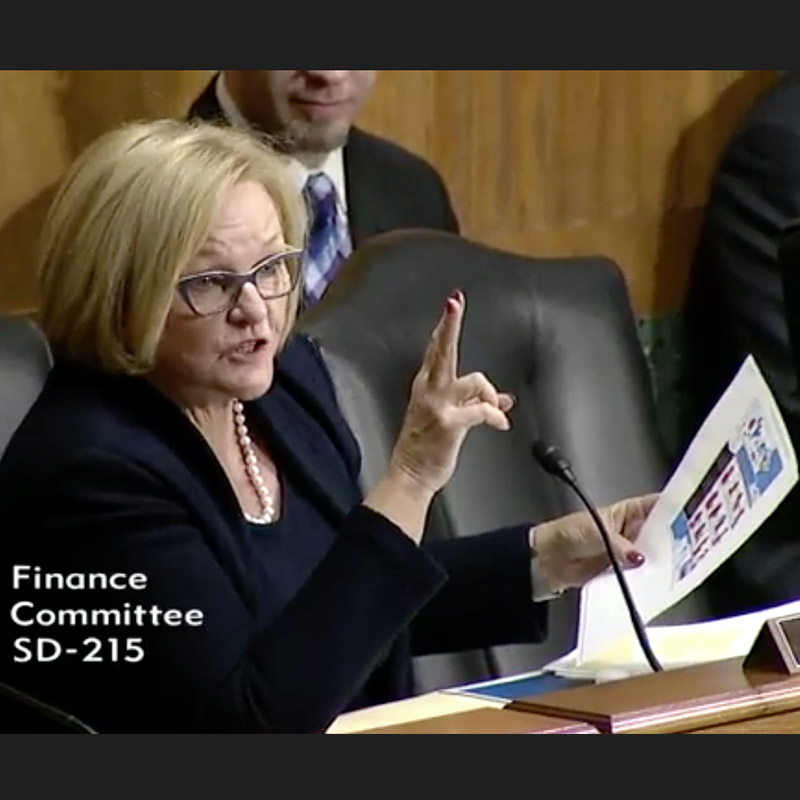 See the graphic for yourself: 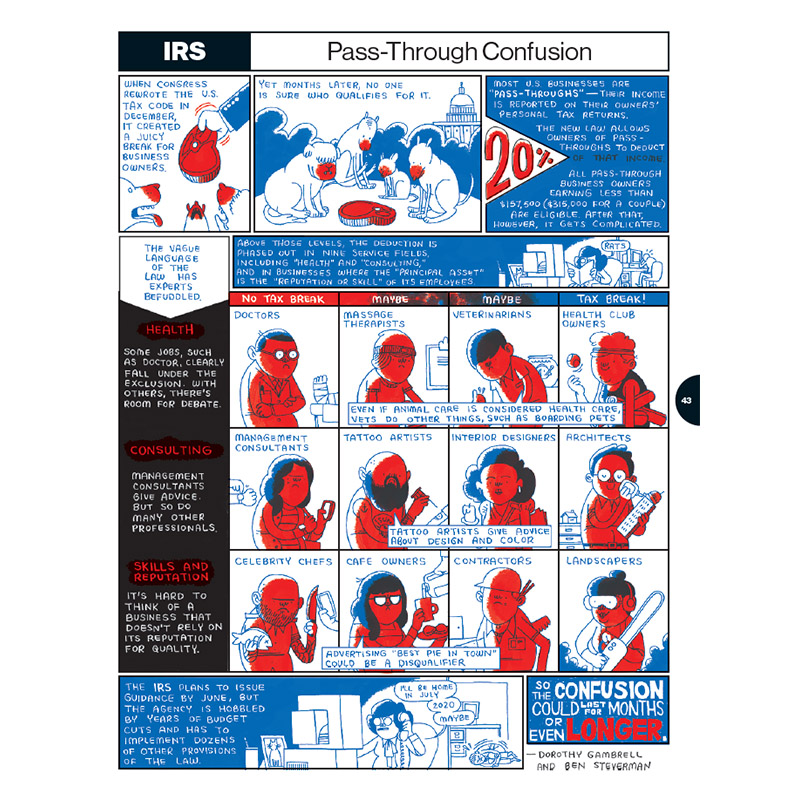 @KanyeWest: You don’t have to agree with trump but the mob can’t make me not love him. We are both dragon energy. He is my brother. I love everyone. I don’t agree with everything anyone does. That’s what makes us individuals. And we have the right to independent thought.

On Tweets between President Trump and Kanye West:

“Kanye West tweeted that he and Trump were both “brothers” and have “dragon energy.” Trump responded by saying “very cool.” In a related story, Trump just made Kanye the Secretary of Dragon Energy.”
— Jimmy Fallon

“Ronny Jackson, Trump’s doctor who he picked to run the Department of Veterans Affairs, might be in trouble for getting drunk at work. But in Jackson’s defense, if your job was to see Donald Trump naked, you’d drink too. ”
— Jimmy Fallon

“You know when I was growing up, superhero movies were for kids, and being President was for grown-ups, and now it’s the opposite.”
— Jimmy Kimmel

“This week French President Emmanuel Macron paid a state visit to the White House where he and Donald Trump competed over who could invade the other’s personal space the most aggressively. I call it power flirting.”
— Samantha Bee