More than half of residents living in Frankfurt now have a migrant background. A total of 61 per cent of residents who were born abroad have come from other countries within the European Union. Brexit may grow that number. And why not? Hot Dogs are also known as Frankfurters and derives its name from the city — not surprising from a metro area where the average citizen consumes 107 liters of beer a year.

The big news from here: If the Germans thought they were somehow off the Russian radar after last year’s elections passed without much meddling by Russia, they were wrong. The federal government in Berlin yesterday had to admit that Russian hackers infiltrated two ministries. Russian Hackers Infiltrated German Government Systems – Report (Handelsblatt)

Putin’s Show of Strength: President Vladimir Putin showed off video simulations during his annual address to Russia’s Federal Assembly today of new nuclear POWERED missiles that he said can’t be stopped by U.S. defense systems. Putin, who complained the U.S. ignored Russian objections to its missile defenses, put on the display of power less than three weeks before presidential elections. “Nobody listened to us. Listen now,” he said. Putin Shows Off New Nuclear Weapons, Warns West to ‘Listen’ (Bloomberg)

Trump Expected to Announce Stiff Steel, Aluminum Tariffs. The timing of the move, which was expected and first reported by Bloomberg, carries a sting for China: President Xi Jinping’s top economic emissary is in Washington this week for meetings to ease tensions between the world’s two biggest economies. (Bloomberg)

Another White House Insider Bites the Dust. Hope Hicks, Trump’s communications director and one of his longest-serving aides, quit. She’d been planning to leave for a while, people familiar said. She’s the fourth comms chief to go since January 2017 and follows other top aides out the door this year. She testified Tuesday to congressional investigators probing Russian election meddling. Trump Loses Key Loyalist Hope Hicks as Russia Probe, Midterms Loom (Bloomberg)

Remember This: NBC News is reporting that Special counsel Robert Mueller’s team is asking witnesses pointed questions about whether Trump was aware that Democratic emails had been stolen before that was publicly known, and whether he was involved in their strategic release.” Investigators also asked “whether Trump was aware of plans for WikiLeaks to publish the emails. They have also asked about the relationship between GOP operative Roger Stone and WikiLeaks founder Julian Assange, and why Trump took policy positions favorable to Russia.” Mueller Asking if Trump Knew About Hacked Democratic Emails Before Release (NBC News)

Flashback: And remember this quote from then-candidate Donald Trump from July 27, 2016: “Russia, if you’re listening, I hope you can find the 30,000 emails that are missing” (YouTube via C-SPAN)

U.K. Prime Minister Theresa May delivered keynote remarks, and she wasn’t letting the Brexit strain show at the dinner — not exactly the comfort zone for a prime minister known as the ‘Maybot’ for her wooden delivery.

Some of the best lines were digs at herself: “What says ‘Theresa May’ more than a comic speech at a boozy dinner for a room full of journalists? I feel right at home.”

“I am, of course, absolutely delighted to be here. Last year, I was looking forward to this event so much that I called a general election to get out of it. But I can’t pull that stunt two years in a row. Or can I?”

WATCH her speech here, and read it here.

NYC Photo of the day. 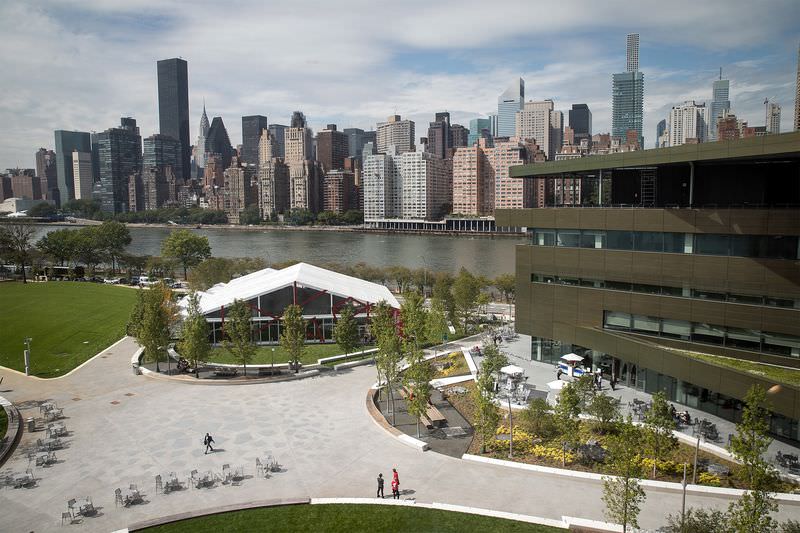 New York’s Tech Scene is Growing Up. Venture capital investment is ballooning, tech giants like Google have added thousands of jobs in the city, and homegrown startups are beginning to find multi-billion dollar exits. New York Will Never Be Silicon Valley. And It’s Good With That (Bloomberg)

And for Climate: When the U.S. Environmental Protection Agency announced it would no longer fund the Climate Leadership Conference, Bloomberg Philanthropies gladly stepped in to fill the gap. This week in Denver, Colorado, climate leaders are convening to discuss innovative strategies for reducing emissions & fulfilling America’s Pledge. As Mike Bloomberg writes in the Denver Business Journal, “The show will go on – bigger and more ambitious than ever.” Michael Bloomberg: Denver Climate Conference Encourages Private Sector Response to Changes (Denver Business Journal)

Trevor Noah said he was shocked to hear President Trump take congressional Republicans to task on Wednesday for their ties to the National Rifle Association.

“I’ve got to tell you, he didn’t say what you’d expect,” Noah said, adding that Trump reminded him of “a drunk uncle calling everyone out at a wedding.”
— Trevor Noah

“He just publicly busted Republicans for being afraid of the N.R.A., and you can see how confident he is. He’s like, ‘Yeah, you guys are afraid! The N.R.A. doesn’t own me. I’m president, nobody owns me! Oh hold on, Putin’s calling. ‘Oh hey, Vlad, yes, yes, I’ll get on it.’”
— Trevor Noah

The White House communications director, Hope Hicks, announced her resignation on Wednesday, a day after admitting to House investigators that she sometimes tells “white lies” on behalf of the president.

“She refused to answer almost all of the committee’s questions, but she did acknowledge that she sometimes tells ‘white lies’ for Trump. Well, duh! Telling lies to white people is what got Trump elected.”
— Stephen Colbert

“White lies, or as Melania calls them, vows.”
— Stephen Colbert

“So, it’s farewell to Ms. Hicks. Now, in every sense of the word, this administration is truly hopeless.”
— Stephen Colbert