I was in China for three days, but in that time the U.S. pulled out of the Iran deal, Trump’s personal attorney turns out to also be DC’s highest paid lobbyist, and someone I thought I knew, the New York State Attorney General, has resigned. And it’s only Thursday.

Americans Arrive from North Korea: Donald Trump welcomed three Americans released from North Korea, a middle-of-the-night triumph as he prepares for his summit with Kim Jong Un. The president and first lady boarded the former prisoners’ plane at Joint Base Andrews shortly before 3 a.m. to greet them. Trump Thanks Kim on Welcoming Three Americans Home (Bloomberg Daybreak)

Essential Consulting Today:
Trump’s election as the “ultimate outsider” in 2016 sent companies scrambling to understand the new president. A handful turned to an unconventional place for help: his longtime fixer and New York lawyer, Michael Cohen.

The New York Times editorial board reacts, closing with this: “Russians and cash — they’ve been a part of Mr. Trump’s life for years, and now they’re elements of the investigation into whether his campaign conspired with Moscow to corrupt American democracy. Mr. Trump’s affection toward the Russian president has led many to ask, “What does Putin have on Trump?” Maybe the ledgers will tell.” Trump’s Shadowy Money Trail (New York Times editorial)

Odd Bedfellows: If anyone can prevent a war between Iran and Israel, it might be Vladimir Putin. The Russian president hosted Prime Minister Netanyahu for the annual Red Square military parade, hours before Israeli forces struck dozens of Iranian targets inside Syria. Netanyahu did his best to please, wearing on his lapel a brown-and-black St. George’s ribbon, a symbol of Russian World War II remembrance that has come to be the banner of the Kremlin’s intervention in Ukraine. Netanyahu Warns Putin that Iran Out to Destroy Israel (Bloomberg Politics – Balance of Power) 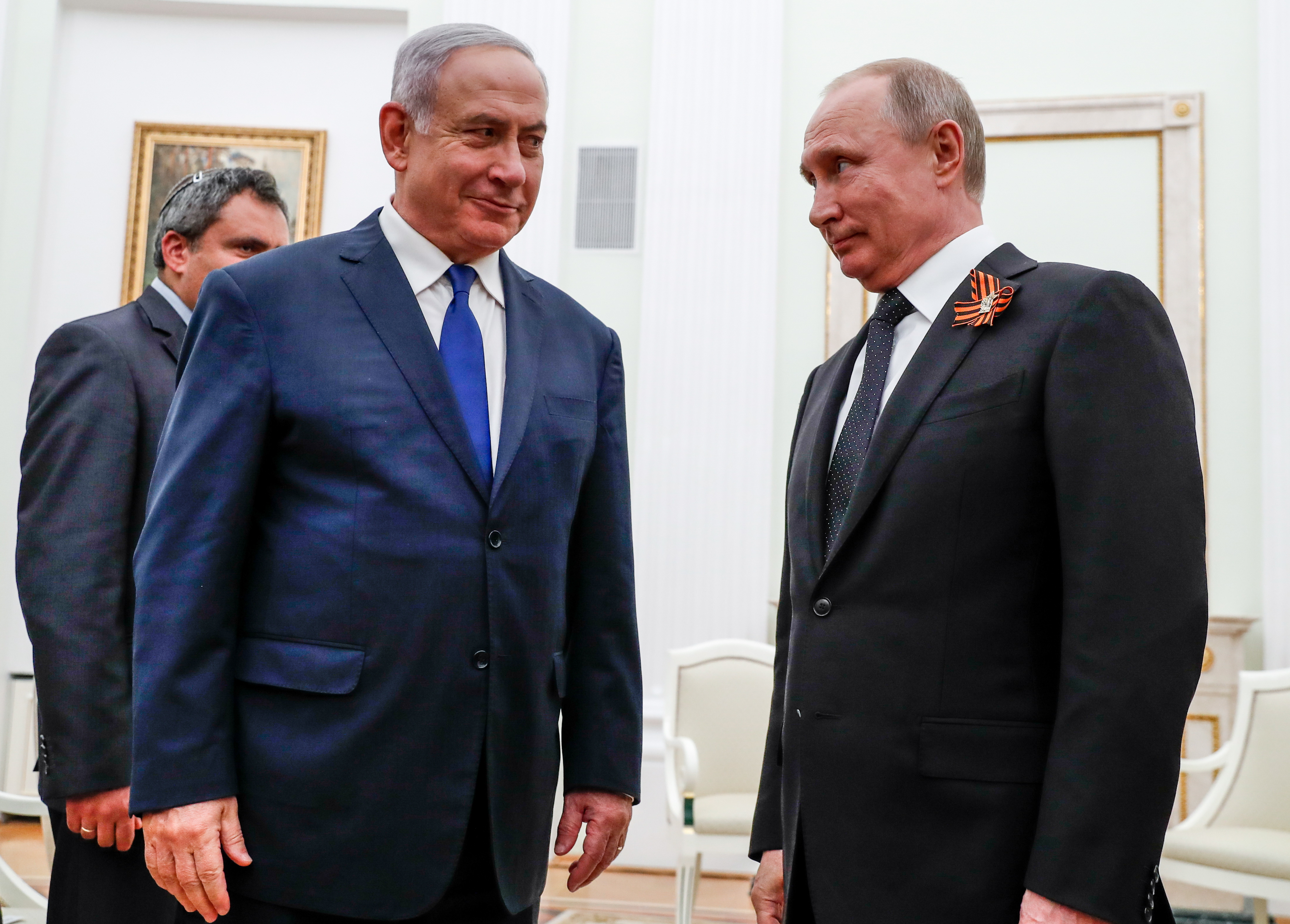 Russia President Putin meets with Israel Prime Minister Netanyahu at the Kremlin on May 9, 2018. Photo by Mikhail MetzelTASS via Getty Images 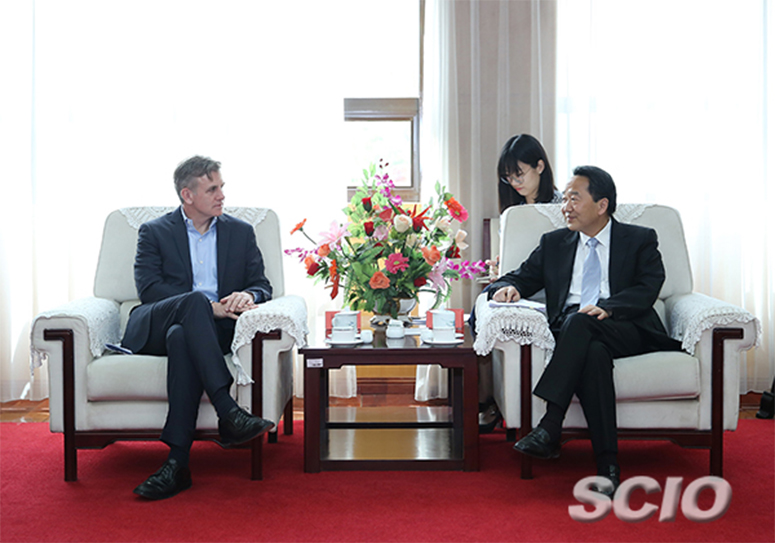 My meeting this week with SCIO Minister Jiang to discuss China-US bilateral relations, how to enhance exchange and collaboration, and increase mutual understanding of peoples in China and the West.

The Guardian: EU rushes to arrange crisis meeting with Iran over nuclear deal

Chart of the day. 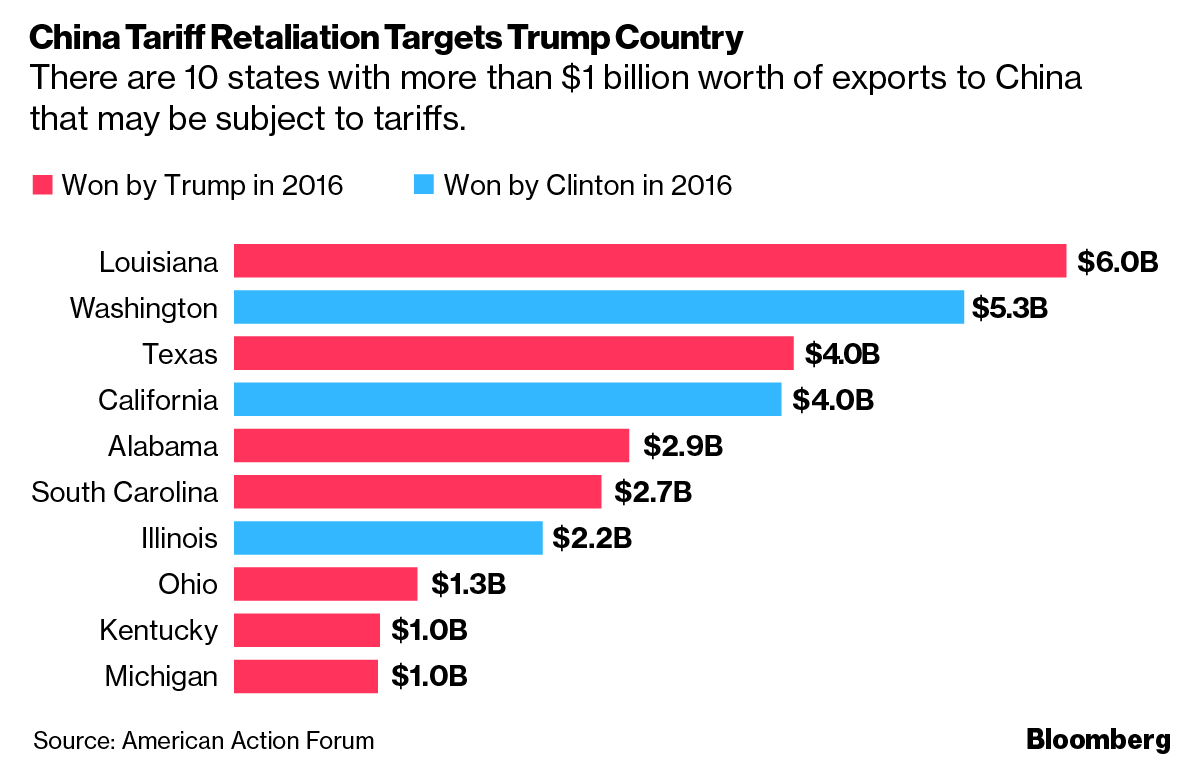 The Tariff Vote: The states whose voters helped put Trump in the White House would be hit hardest by China’s plans to retaliate against new U.S. trade tariffs, according to a report to be released today. The American Action Forum, a Washington-based group that opposes protectionism, found that seven of the 10 states facing potential Chinese tariffs on more than $1 billion of exports backed Trump in 2016. China Tariff Retaliation Threatens Key States in Trump Country (Bloomberg)

On news that North Korea had released three American hostages

“This is a major diplomatic win for the president. You know, the last time Trump brought a prisoner back from a foreign country, she became first lady. And that worked out great.”
— Jimmy Kimmel

On the record number of women running for office in the U.S.:

“You know who’s a better advocate for women? Women! Last night’s primaries made that very clear. Women ran in 23 open Democratic House primaries — in Ohio, West Virginia, North Carolina and Indiana — and they won 18 of them. And remember Rachel Crooks, one of the women who accused Trump of sexual assault? Last night she won a nomination for the Ohio state legislature. The future is female, or at least it better be, because I am done with this [expletive].”
— Samantha Bee

On connections between a Russian oligarch and Trump attorney Michael Cohen:

“It’s pretty crazy; the Stormy Daniels money could be traced all the way back to Vladimir Putin. In response, Putin said, ‘Donald can spend allowance however he wants.’”
— Jimmy Fallon

For more Best of Late night from the New York Times, click here.