Most Read on the Bloomberg Terminal (Last 8 Hours):
Deutsche Bank is Said to Weigh U.S. Retreat in Trading Rethink (Bloomberg)

Macron’s Day Ahead: After an official arrival ceremony at the White House this morning, French President Emmanuel Macron’s second day in Washington will include a joint press conference with President Trump at 11:45 a.m. and will end with a State Dinner tonight at the White House. Business and Pleasure on the Menu for Macron’s Second Day in the U.S. (Washington Post) 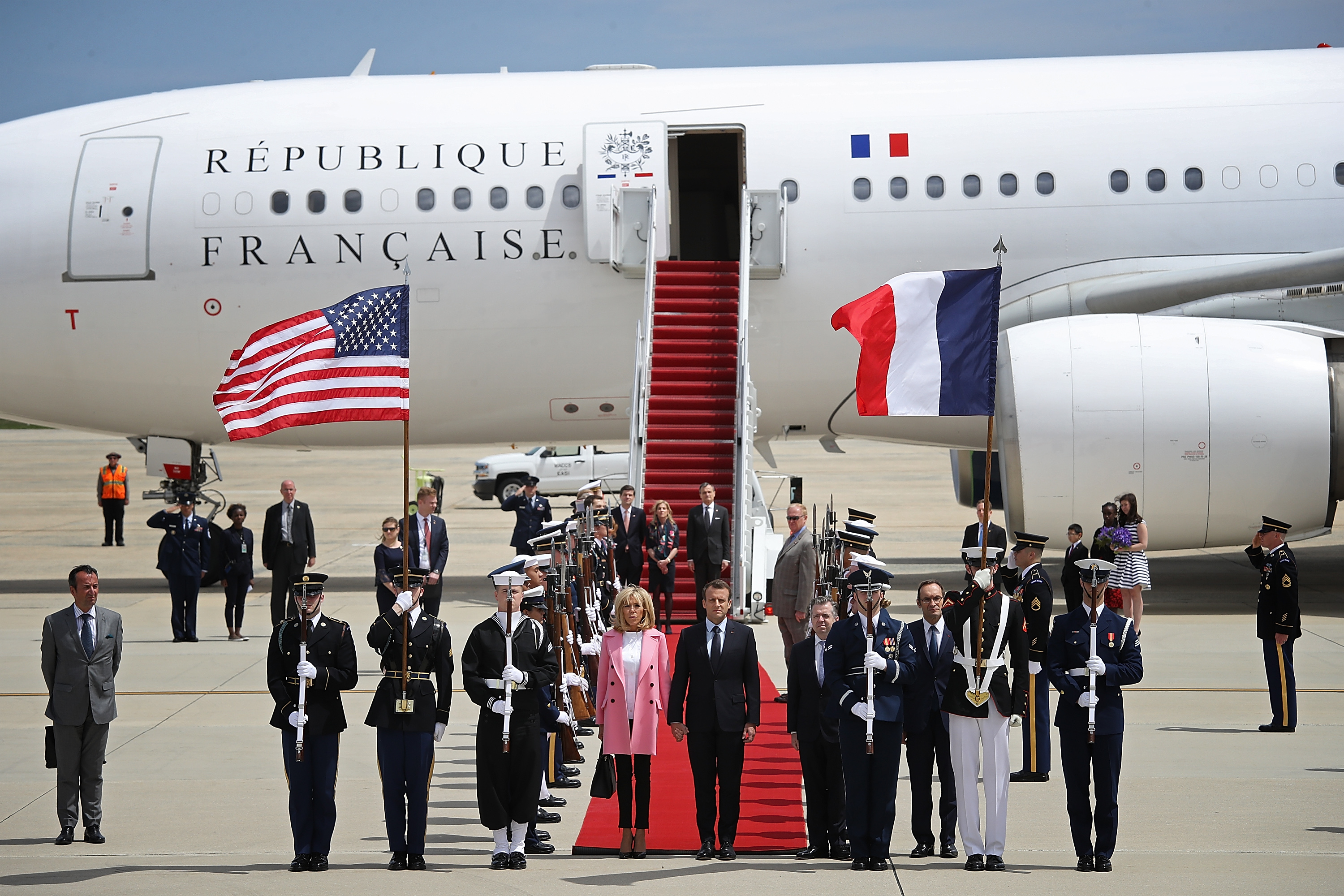 French President Emmanuel Macron and his wife Brigitte arrive at Andrews Air Force Base April 23, 2018 at Joint Base Andrews, Maryland. Macron is in Washington for the first state visit hosted by U.S. President Donald Trump. (Photo by Win McNamee/Getty Images)

Trump’s Moscow Mystery Deepens: Flight records obtained by Bloomberg provide fresh details about Donald Trump’s whereabouts for two nights in November 2013 that have garnered international attention. Ousted FBI Director James Comey says the president told him that a salacious report about his behavior in Moscow during the Miss Universe pageant couldn’t be true because he didn’t spend the night in Russia during that trip. The new information tells a different story. Flight Records Illuminate Mystery of Trump’s Moscow Nights (Bloomberg)

China Prepared for Slowing Growth: China’s leaders are giving their strongest signal since 2015 that growth in China could slow — and that they’re prepared to tweak policy if trade or financial risks threaten a sharp deceleration. Xi Ready to Respond as China Rattled by Trade, Debt Risks (Bloomberg)

At Last: Facebook Publishes Content Removal Policies for First Time (Bloomberg) The community standards read like the result of years of trial and error: While fully nude close-ups of buttocks aren’t allowed, they are permitted if “photoshopped on a public figure.” Content from a hacked source isn’t acceptable “except in limited cases of newsworthiness.”

The Japan Times: G-7 backs Japan on abductees and security ahead of U.S.-N. Korea summit

“There’s a nationwide outbreak of E. coli in romaine lettuce. In fact, it’s so serious that President Trump put out a statement saying that just to be safe he hasn’t eaten lettuce for the past 50 years.”
— Trevor Noah

On the royal birth in London Monday:

“This is Kate’s third child in just five years. When she heard that, Meghan Markle was like, ‘Hey, we’re not all expected to do that, are we?’”
— James Corden

“Today was the first time in a long time that the breaking news was not about President Trump — which is weird, because usually the hashtag ‘royalbaby’ is about Donald Trump.”
— Conana O’Brien