They visited a family whose home was rebuilt to current hurricane resistant standards as well as a warehouse with construction supplies and materials for the resilient housing initiative.

Today, Bloomberg team members are participating in the Clinton Global Initiative’s Action Network on post-disaster recovery at the University of the Virgin Islands.

The USVI’s recovery has been faster and more comprehensive than many other Caribbean islands mainly due to cooperation among local and federal agencies, private and philanthropic leaders, and technical experts who worked together on clear goals, according to a Bloomberg Philanthropies report issued this week.

President, Secretary Clinton Visit St. John Ahead of Post Disaster Recovery Meeting (CBS U.S. Virgin Islands)
President and Secretary Clinton made a visit to St. John Monday … and they saw how public private partnerships between groups like Love City Strong, Bloomberg Response and others made the rebuild possible. 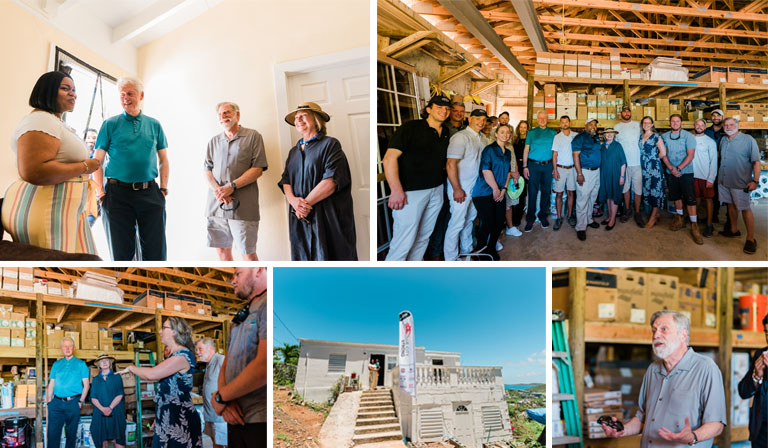 Clockwise from the top right:
–St. John resident Adele Thomas discusses the rebuilding and fortifying of her home with Bill Clinton, Tom Secunda and Hillary Clinton.
–Staff from the Bloomberg Response Team, Love City Strong, Love for Love City, and the Clinton Global Initiative join the Clintons and Secunda inside the new supply bunker in St. John.
–Meaghan Enright of Love City Strong explains how the bunker is meant to empower residents and volunteers in a future natural disaster.
–Adele Thomas and her son stand proudly in front of their home.
–Tom Secunda discusses lessons learned in the aftermath of Hurricanes Irma and Maria and how the model created in St. John can be scaled for other islands to prepare and deal with natural disasters.
Photo credit: Anne Bequette.

Washington vs Big Tech: Silicon Valley Battered as Washington Turns Up Antitrust Heat (Bloomberg)
U.S. lawmakers and federal agencies take steps to investigate tech firms, with Google, Apple, Facebook, Amazon in the crosshairs at the Department of Justice and the Federal Trade Commission.​

UK Today: Trump’s State Visit-Turned-Stress Test for the Special Relationship (Bloomberg)
While the first day of his three-day visit featured royals, pomp and circumstance, today brings political talks with Prime Minister Theresa May and potentially large anti-Trump demonstrations on the streets of London. There have already been scattered protests, and the Trump Baby blimp has returned.

Today in Finance: The Buy-Side Trader Is Latest Job to Be Outsourced as Costs Rise (Bloomberg)
Once a niche business aimed at startups, these desks are seeing demand grow as money managers face mounting pressure to cut costs in an increasingly onerous market environment.

2020 Campaign Watch: The 2020 Campaigns Aren’t Ready for Deepfake Videos (Axios)
The recent manipulated video of House Speaker Nancy Pelosi was just a taste of what could lie ahead. Fake video has the potential to sow huge political chaos, and countering it is wildly difficult. And right now, no one can agree who’s responsible for countering it.

Plan ahead! The Wear Orange campaign asks Americans to do one simple thing on June 7 for National Gun Violence Awareness Day: Wear Orange. Thousands of Americans will also participate in events around the country during Wear Orange weekend on June 8 and 9. The campaign is dedicated to honoring the lives of Americans affected by gun violence and elevating the voice of every American who demands an end to gun violence. Click here to find an event near you and here to learn more about the history of Wear Orange.

“This is a big day: Jay Z is officially a billionaire. And he’s married to Beyonce. But, is he truly happy? Yes, of course he is. He’s happier than you’ll ever be.”
— Trevor Noah

On President Trump’s State Visit to the U.K.:

“This season of ‘The Crown’ has really jumped the shark.”
— Stephen Colbert

“That’s right. The Queen’s gift for Donald Trump was a book. Either she doesn’t know Trump, or she’s trolling him.”
— Trevor Noah