Most Read on the Bloomberg Terminal (Last 8 Hours):
How Facebook Made Its Cambridge Analytica Crisis Even Worse (Bloomberg)

U.S. Plans $60 Billion China Tariff Hit as Soon as This Week: The U.S. will slap tariffs of up to $60 billion on Chinese goods this week to punish Beijing for alleged IP theft, people familiar said. It’s also seeking support against China’s trade policies in exchange for relief from steel and aluminum levies, a European official said. Chinese Premier Li Keqiang said he doesn’t want a trade war. He plans to further open up manufacturing and won’t force foreign firms to transfer technology to domestic ones while doing so. (Bloomberg Daybreak)

Saudi Tour: In an exclusive interview with Bloomberg’s Erik Schatzker, Prince Alwaleed bin Talal reveals the deal he struck to leave the Ritz in Riyadh. For a story on what Alwaleed’s cousin, Crown Prince Mohammed bin Salman, may hope to achieve during a three-week cross-country tour of the U.S., including his visit to see Mike Bloomberg, see here. Bloomberg’s interview with Prince Alwaleed first aired on Bloomberg’s new flagship morning show from Dubai called “Bloomberg Daybreak: Middle East.” (Bloomberg – Balance of Power and ABC News) 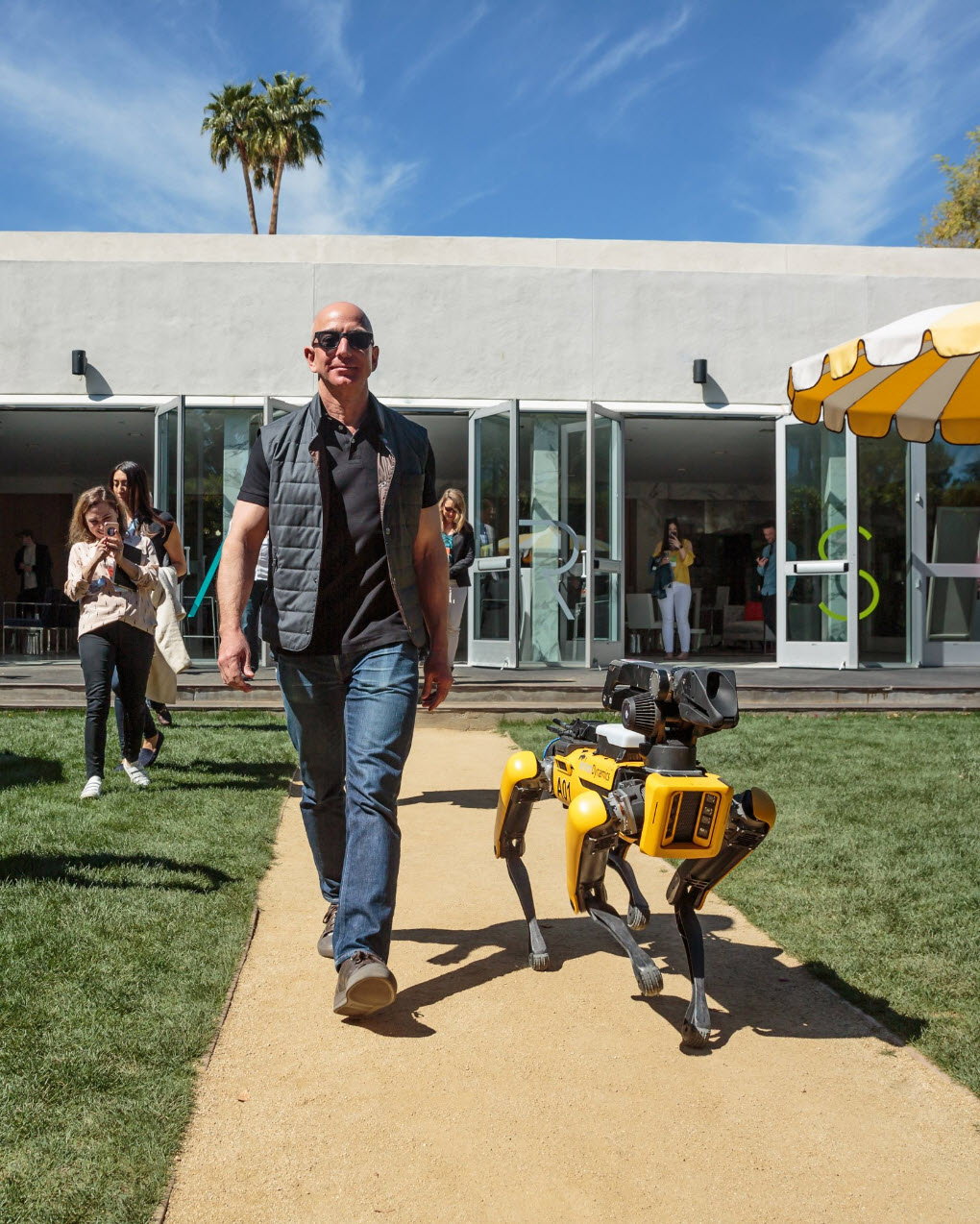 Jeff Bezos tweeted this image yesterday and said he was taking his “new dog for a walk” at the opening of the annual MARS robotics conference in Palm Springs, California.

Not tipping his hand: U.S. Senate Majority Leader Mitch McConnell has remained noticeably silent amid growing Republican concerns that President Trump may fire Special Counsel Robert Mueller. The president’s three-day Twitter tirade against the Special Counsel culminated in the decision to hire a vocal critic of Mueller as the newest member of his legal team. Steven T. Dennis looks at the complicated balance McConnell must strike as he faces questions about the matter. McConnell Remains Silent About Trump’s Attacks on Mueller (Bloomberg – Balance of Power)

Bloomberg Ideas Today: Tune in to the Bloomberg Ideas event in San Francisco today, featuring Bloomberg thinkers and writers engaging in an extended conversation on the economics of AI from 12 noon to 3PM New York time and startups and capital markets from 4-7pm New York time. The discussions will be livestreamed on the terminal at LIVE <GO>, Bloomberg View’s Facebook page and on Twitter. If you missed the discussion on tech companies and regulatory grey areas, you can watch the panel on the Bloomberg terminal or on View’s Facebook page.

USVI Recovery Update: Many residents said they were thrilled with the pace of recovery given the initial damage from back-to-back hurricanes. They remember the impassable roads, the trees snapped in half, the sunken boats and the widespread gutting of houses and other buildings. St. John benefited from some early intervention from famous part-time residents like Thomas F. Secunda, a co-founder of Bloomberg L.P., and Kenny Chesney, the country music singer. Both mobilized help, with Bloomberg Philanthropies paying experts on power restoration and other consultants to expedite recovery in St. John and the rest of the territory. Smaller Crowds, Quieter Shores as St. John Slowly Recovers (New York Times)

The Guardian: Corbyn: I would still do business with Putin despite Skripal attack

@MikeBloomberg: This Saturday, students across the country will demand action on common-sense gun safety laws.
Join them and millions of Americans for the March For Our Lives on Saturday, 3/24. Find a march near you at http://every.tw/324march

@PattiHarris: Our 35 finalist cities in @BloombergDotOrg’s U.S. #MayorsChallenge are getting a crash course in how to take a good idea & adapt it into a great one. Meet the expert coaches who are providing guidance this week during Ideas Camp: http://bloombg.org/2GGKVhG

@MikeBloomberg: Fighting noncommunicable diseases with policies – like smoke-free laws & fiscal policies – works. We see it around the world every day and through my role as @WHO Global Ambassador for NCDs, we’re committed to continued progress. http://mikebloom.bg/2GIBVIY

@drkellyhenning: “For the first time in history, more people are dying from NCDs like heart disease and cancer
than from communicable diseases like malaria and polio.” My piece on this public health crisis in @OUPAcademic.

“Yesterday, Vladimir Putin won re-election with 76 percent of the vote. So congratulations to President Putin for making up a realistic-sounding number.”
— Stephen Colbert

“This is Putin’s highest margin of victory yet — it’s really impressive. Though I’m starting to think he might have had help from the Russians.”
— Stephen Colbert

“There you have it, Vladimir Putin won, and now he can focus on his next election: ours.”
— Jimmy Kimmel

Stephen Colbert took on reports that Cambridge Analytica had gained access to the private information of over 50 million Facebook users, none of whom had been notified.

“Really? The one time I actually would have wanted a Facebook alert.”
— Stephen Colbert