Bonjour again from Paris. Mike Bloomberg, Henry Kissinger, and Hank Paulson announced the launch of the New Economy Forum, a new platform that will hold its first sessions in China this November. As the Financial Times and the South China Morning Post report this morning, the event is aimed at addressing trade, economic inequality, climate change and other issues of global concern.

Kissinger said an “understanding between China and the US can provide a framework for peace and prosperity – otherwise we will divide the whole world into sections and it will lead to a situation comparable to world war one.” Mike added that many business people were worried by the short-term nature of US policy making, which contrasted with the long-term thinking behind Chinese projects such as Xi Jinping’s Belt and Road Initiative. He said the New Economy Forum “will promote collaboration among participants.”

Turkish President Erdogan was at Bloomberg HQ in London yesterday and said he intends to tighten his grip on the economy and take more responsibility for monetary policy if he wins an election on June 24. The remarks sent the Turkish lira to a record low against the dollar.

And here in Paris, President Macron is expressing concern over the US decision to move its Embassy to Jerusalem and discussed the situation with the King of Jordan and plans talks with the Israeli PM for next week. At least 58 people were killed, and thousands injured in protests that erupted yesterday along the Gaza Strip in response to the US action.

Killings in Gaza, New Embassy in Jerusalem, and Peace as Distant as Ever (New York Times) 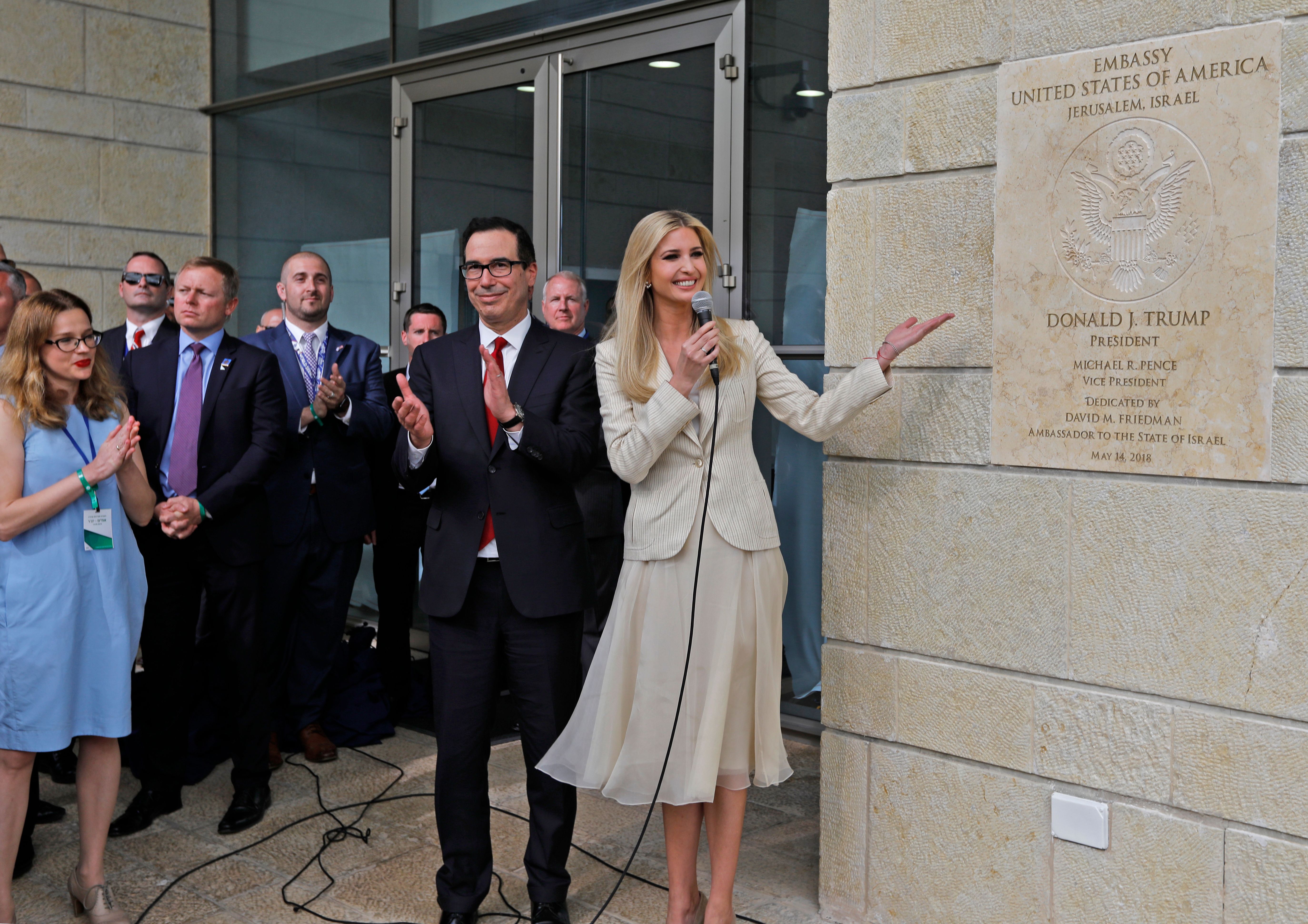 50 Miles Away from Gaza: US Treasury Secretary Steve Mnuchin claps as Ivanka Trump unveils an inauguration plaque during the opening of the US embassy in Jerusalem on May 14, 2018.(Photo by Menahem Kahana/AFP/Getty Images)

President Macron Condems Violence Against Gaza Protests (Jerusalem Online)
French President Emmanuel Macron’s office released a statement late Monday condemning the use of violence by Israel’s security and military forces against protesters. The statement reiterated France’s opposition to the embassy move, as Macron has argued it would complicate the peace process between Israel and the Palestinians.

The day in photos: Split Screen Coverage of Violence in Gaza and Ceremony in Jerusalem (Bloomberg) 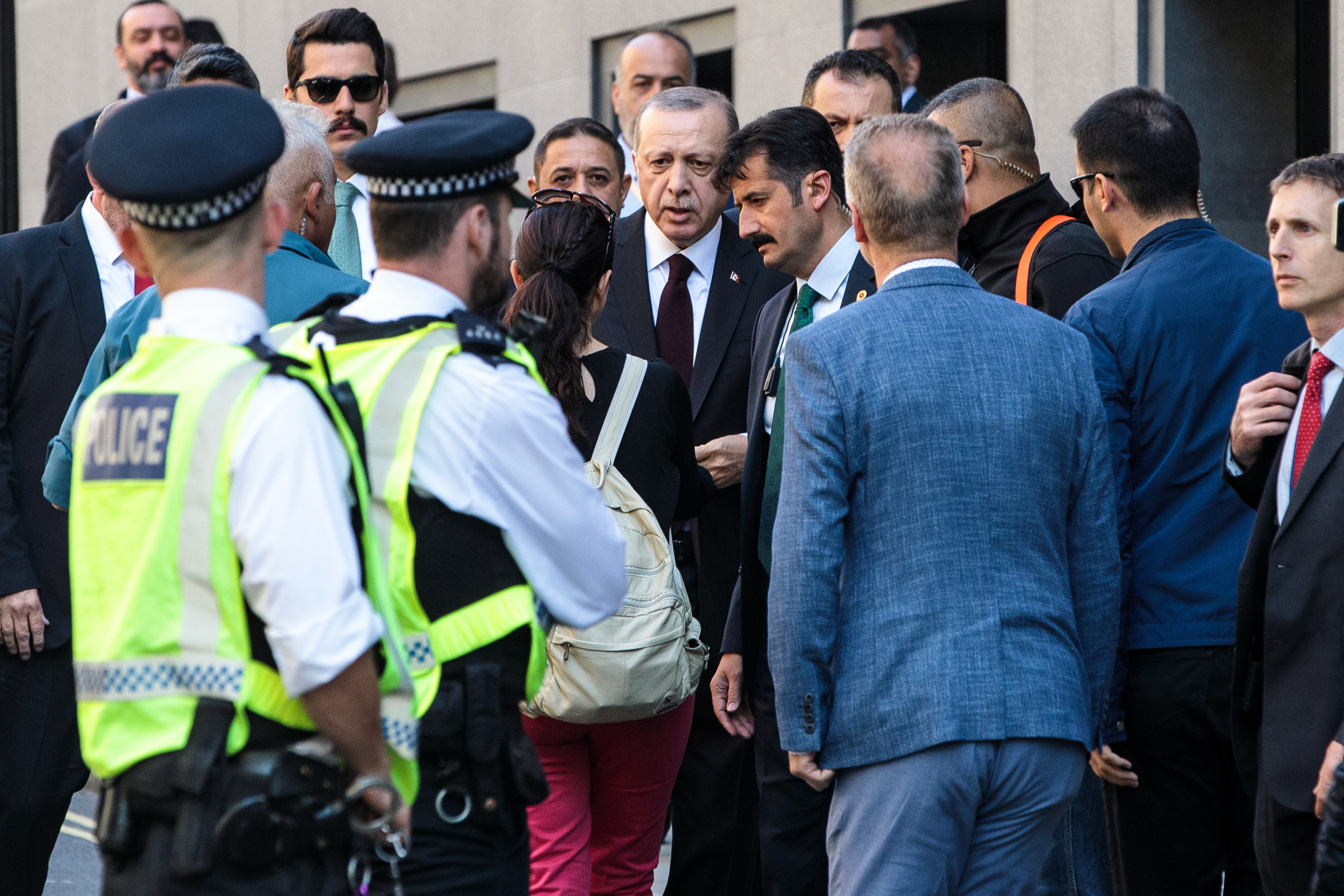 Turkish President Recep Tayyip Erdogan is surrounded by security and media as he arrives to speak at Chatham House on May 14, 2018 in London, England. Erdogan is in the UK for a three-day visit, which includes a closing lecture at the Tatlidil Forum in Oxford, an audience with The Queen and talks with British Prime Minister Theresa May. (Photo by Jack Taylor/Getty Images)

Erdogan Plans to Tighten His Grip on Turkey’s Economy (Bloomberg)

Apple CEO Tells Bloomberg He Told Trump Tariffs Are Wrong Approach to China (Bloomberg)
In an interview on Bloomberg Television, Apple CEO Tim Cook said his message to Trump focused on the importance of trade and how cooperation between two countries can boost the economy more than nations acting alone. He said he urged fixing DACA immigration issue in a Trump meeting and also said Apple ups buybacks because stock is ‘good value.’

Trans Fats Should Be Eliminated Worldwide by 2023, W.H.O. Says (New York Times)
The campaign was developed in partnership with Vital Strategies, a global health group backed by Michael Bloomberg, who introduced the nation’s first municipal ban on trans fats in 2006 when he was mayor of New York City. Mike Bloomberg said: “Banning trans fats in NYC helped reduce the number of heart attacks, and eliminating their use globally can save millions of lives.”

Why Germans Are Getting Fed Up with America: It’s getting harder for Angela Merkel and the German elite to hold back growing anti-Americanism. (Bloomberg Opinion – Leonid Bershidsky)

Badge Factories proliferate: The Gun-Law Loophole that Entices Tycoons and Criminals to Play Cop (Bloomberg)
This is how an accused drug smuggler, Elon Musk bodyguards, hedge fund magnate Robert Mercer and hundreds of others have received gun privileges meant for the police.

The Guardian: Palestinians to bury 58 people killed in US embassy protests

The Telegraph: Meghan Markle’s extended family arrive in London despite not being invited to Royal wedding

On Trump’s personal lawyer Michael Cohen, who has been accused of selling access to President Trump:

“Trump’s cabinet has had one corruption scandal after another and his personal fixer was literally selling access to the president. Trump didn’t drain the swamp, he bottled it and sold it as Dr. Trump’s Miracle Healing Elixir.”
–Seth Meyers

“President Trump made a Mother’s Day video where he called his mom ‘a great person, really warm and really smart.’ Which could only mean one thing: Trump was adopted.”
–Jimmy Fallon

“Today was Facebook founder Mark Zuckerberg’s birthday. I don’t really care, I just wanted to give away some of his personal information.”
–Seth Meyers