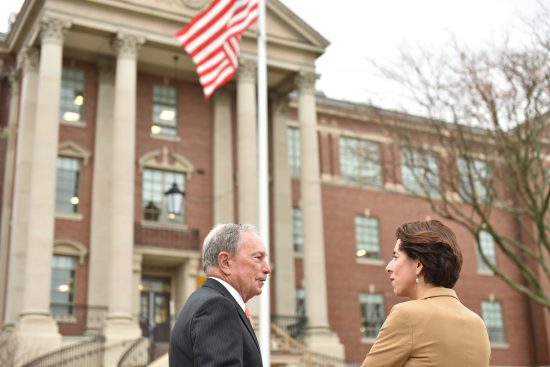 “This country is in trouble, and we’ve just got to do something about it,” Bloomberg said.

Speaking at the Adult Correctional Institutions, where a pioneering program has significantly reduced overdose deaths among released inmates, Bloomberg said Rhode Island is one place where something is being done. And that is what prompted him to visit the state, where he met with ACI and other officials on an afternoon-long fact-finding mission.

Michael Bloomberg to visit Iowa as he considers a 2020 presidential run (Des Moines Register)
Mike Bloomberg will host a panel discussion and screening of his new film about climate change, “Paris to Pittsburgh,” in Des Moines.

Elimination of student loans opens doors of opportunity for Hopkins undergraduates (HUB-Johns Hopkins)
Bloomberg’s historic $1.8B gift in support of financial aid means a Hopkins education is within reach for qualified students, regardless of their ability to pay.

Can Mike Bloomberg Save Us All From Ourselves? (Yonkers Times – New York)

Joy Behar Admits She ‘Liked’ Trump Before He Became ‘Psycho’ President (TooFab)
“We know the beast,” she said. “We knew him. We get it. Just like Michael Bloomberg said, ‘I know a conman when I see one.’ He’s a conman,” she explained. “New York is hip to it. The rest of the country didn’t know him the way we do.”

Hot on The Terminal: Trump Signals U.S. Likely to Go Ahead With China Tariff Increase (Bloomberg)

Movie Section: Climate of Hope: ‘Paris to Pittsburgh’ Named One of the Eight Best Documentaries in 2018 (Inc. magazine)

In the wake of President Donald Trump’s decision to exit the Paris climate agreement, this Bloomberg Philanthropies-produced documentary follows the individuals fighting the impacts of climate change in their own backyards. The film also focuses on small-business owners in Iowa who have embraced renewable energy to keep their businesses competitive and a nonprofit in California that helps businesses hire former inmates trained in solar panel installation.

“Today is Cyber Monday. It’s the busiest shopping day of the year, and Americans spent billions of dollars online. Billions. Earlier today, I saw a U.P.S. guy hiding under his own truck and breathing into a paper bag. He was like, ‘I can’t do it!’”
–Jimmy Fallon

“At Sears, the entire store was 50 percent off. Not the items — you could buy the actual store.”
–Jimmy Fallon

“Where else would we accept this? If someone told me, ‘Hey Trevor, these test results say that you have cancer, but I’m not a doctor, I think you’re fine,’ trust me, I would not be like, ‘Oh, you’re not a doctor? Carry on, carry on. Tell me your thoughts on my health.’”
–Trevor Noah