Wag the Dog. Trump made unprecedented statements this morning about sending missiles into Syria. We’re in a situation eerily similar to the 1997 black comedy film in which the United States president lands in the middle of a sex scandal and enlists the expertise of a spin doctor (Robert De Niro) who decides a distraction is the best course of action and helps him fabricate a war in Albania. Perhaps we should call De Niro to ask how this ends.

Capitol Hill. Despite the fireworks of testimony (or lack thereof) Congress has rarely, or effectively, broken up or even limited the reach of tech companies. Despite years of rhetoric it was Judge Green and not Congress that broke up Ma Bell, and it was Joel Klein not the Congress that reached an anti-trust settlement with Microsoft. Facebook doesn’t really have a legislative problem, but it continues to fight beneath its weight class in communications and outreach to people who can help in time of crisis.

Most Read on the Bloomberg Terminal:
Trump Tells Russia to ‘Get Ready’ for Missiles Coming at Syria
(Bloomberg)

Zuck in the Senate. 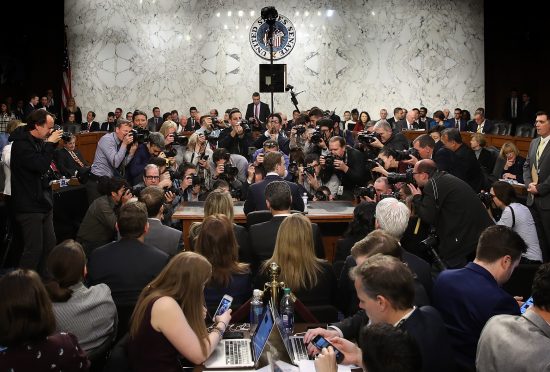 Six Takeaways from Zuckerberg’s Time in the Senate Spotlight (Bloomberg)
In five hours of testimony before a joint hearing of the Senate Judiciary and Commerce committees, Zuckerberg ducked some questions, skirted around others, but answered most of the questions from Senators who didn’t seem to have ever used Facebook. Today he’ll be grilled in the House of Representatives, where presumably younger questioners will know more about Facebook.

Six takeaways: Facebook’s privacy policy is inadequate, regulation is coming, the monopoly conversation has begun, Facebook hopes to solve issues with AI, they don’t know how much damage was done, and Zuckerberg won over investors and a few lawmakers.

Facebook’s China Argument Revealed in Zuckeberg’s Hearing Notes (Bloomberg)
Zuckerberg was prepared to cite competition with China if asked whether the social-media giant should be broken up, according to a photograph of internal notes the chief executive officer took to a congressional hearing on Tuesday. 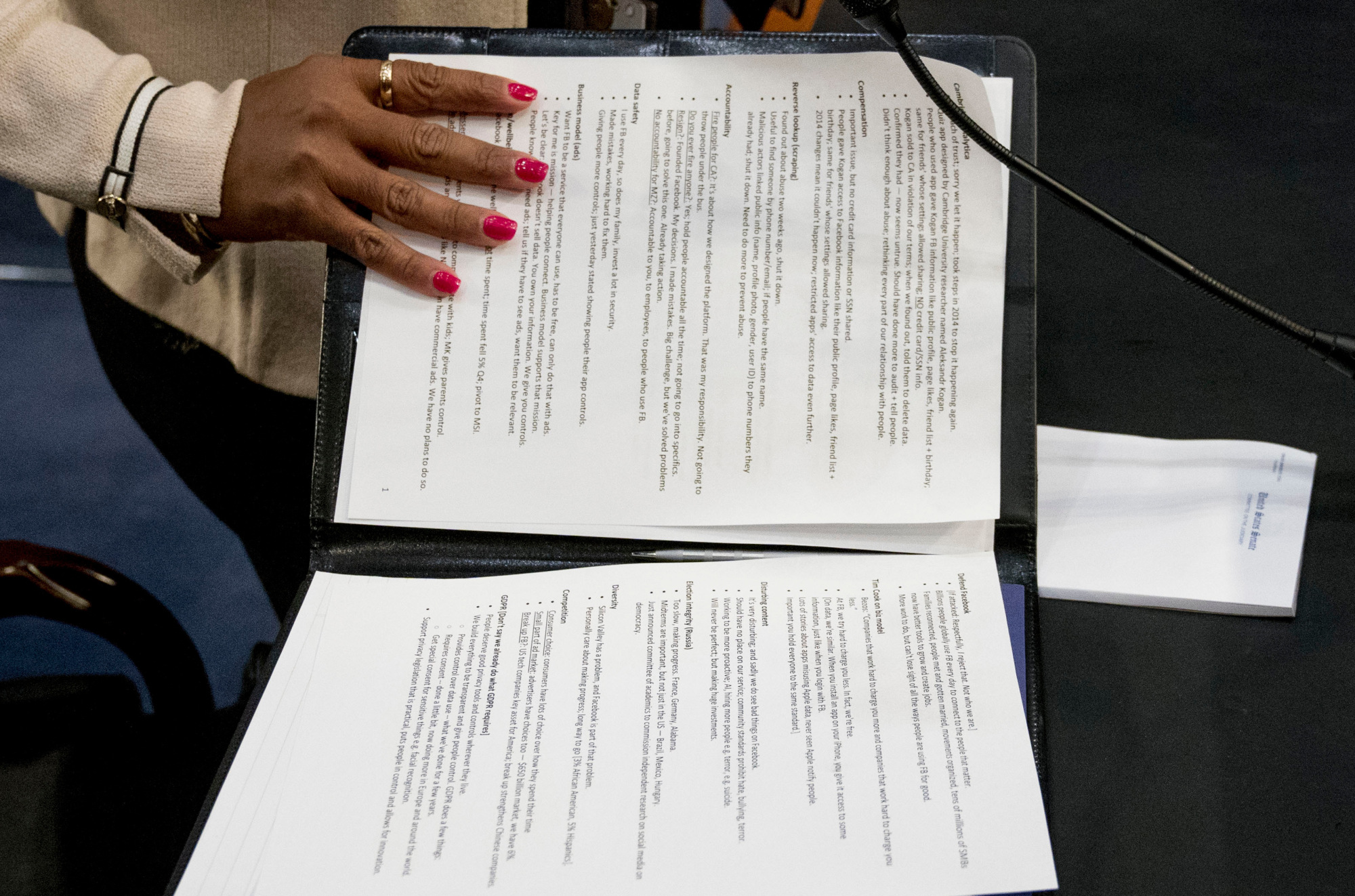 An aide to Mark Zuckerberg closes a binder of notes left on the table. Photographer: Andrew Harnik/AP Photo.

Trump’s personal lawyer is more likely to go to prison for how he handled taxi medallions than Stormy payments: Robert Mueller is Asking About Michael Cohen’s History as a New York City Taxi Cab Owner (Buzzfeed)

Trump Sought to Fire Mueller in December (New York Times)
In early December, President Trump, furious over news reports about a new round of subpoenas from the office of the special counsel (including his business dealings with Deutsche Bank), told advisers in no uncertain terms that Robert Mueller’s investigation had to be shut down.

Patrick Reed at 731 Lex: The Masters golf winner appeared on Bloomberg TV yesterday with anchor Vonnie Quinn where Patrick demonstrated his famous wedge shot in the studio. He also stopped by Mike’s desk for a chat. Golfer Patrick Reed Talks about Winning the 2018 Masters (Bloomberg Television)

Bloomberg (Paris): Macron Pulls Out All the Stops in Rail Reform—Even Doing TV

@realDonaldTrump: Russia vows to shoot down any and all missiles fired at Syria. Get ready Russia, because they will be coming, nice and new and “smart!” You shouldn’t be partners with a Gas Killing Animal who kills his people and enjoys it!

@realDonaldTrump: So much Fake News about what is going on in the White House. Very calm and calculated with a big focus on open and fair trade with China, the coming North Korea meeting and, of course, the vicious gas attack in Syria. Feels great to have Bolton & Larry K on board. I (we) are

@realDonaldTrump: …doing things that nobody thought possible, despite the never ending and corrupt Russia Investigation, which takes tremendous time and focus. No Collusion or Obstruction (other than I fight back), so now they do the Unthinkable, and RAID a lawyers office for information! BAD!

“Experts say the majority of Facebook users had their data harvested from taking online quizzes. Yeah, so it’s worse than we thought: Now Russia knows how stupid we are.”
— Conan O’Brien

“Facebook founder Mark Zuckerberg testified before a joint Senate commerce and judiciary committee today, in front of a bunch of people whose password is definitely ‘password.’”
— Seth Meyers

“In a way, I feel like Zuckerberg has already experienced the worst punishment of all: He had to spend four hours explaining Facebook to senior citizens.”
— Trevor Noah

And finally, from Bloomberg Balance of Power: For Trump, there’ll be no gilt-edged invitation, no Theresa May. They have been left off the guest list of the May 19 wedding of Prince Harry and Meghan Markle at Windsor Castle. Former President Barack Obama isn’t coming either because the couple decided not to ask any politicians to witness their nuptials.