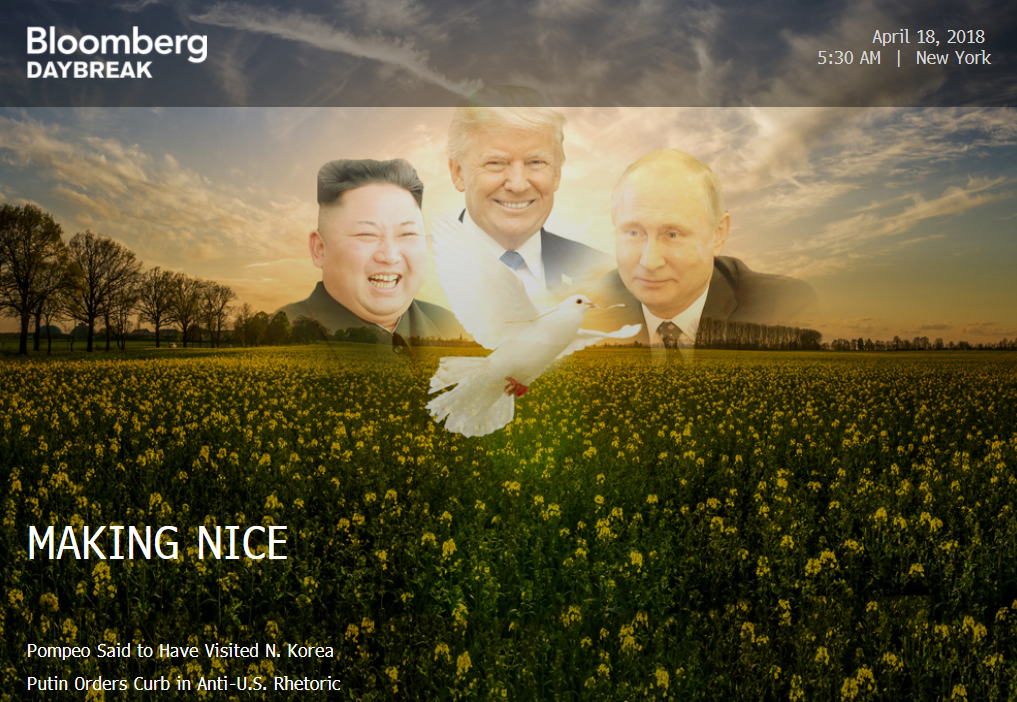 Diplomacy is breaking out. CIA Director Mike Pompeo made a surprise visit to North Korea to meet Kim Jong Un and prepare for a possible summit with President Trump, people familiar said. Pompeo — who’s awaiting confirmation as secretary of state — was there on March 31 and April 1. “A pretty dramatic development,” said Adam Mount, a senior fellow with the Federation of American Scientists.

And Vladimir Putin is giving Trump a chance to make good on pledges to improve ties and ease tension, people familiar said. The Kremlin ordered officials to curb anti-U.S. rhetoric. It explains why Russian lawmakers on Monday pulled a draft law that would have imposed sweeping counter-sanctions on U.S. companies. (Bloomberg Daybreak – DAYB <GO> on
the Terminal).

World Trade Update: President Trump welcomes Japan to the US: “While Japan and South Korea would like us to go back into TPP, I don’t like the deal for the United States. Too many contingencies and no way to get out if it doesn’t work. Bilateral deals are far more efficient, profitable and better for OUR workers. Look how bad WTO is to U.S.”

For the record: South Korea is not part of the Trans-Pacific Partnership at the moment, but has expressed interest in joining.

The EU moves forward: Commissioners in Strasbourg discussed the finalized EU trade agreements with Japan and Singapore, which will be formally approved this morning. The deals, particularly the one with Japan, are supposed to “send a strong signal to the world in support of open and rules-based trade,” as an official put the rationale to Politico’s Brussels Playbook. The message to Donald Trump: Two of the world’s four largest economies think wide-ranging trade pacts are a good idea. (Brussels Playbook – Politico)

Maybe the US government should ask Facebook to do our taxes, they probably already have the data: IRS’s online filing system malfunctioned yesterday, just as last-minute filers were racing to meet the April 17 deadline. Maybe we shouldn’t be surprised: Historian Stephen Mihm notes that the agency is still using code from the 1950s.
The IRS Really Needs Some New Computers (Bloomberg View – Stephen Mihm)

Trump’s National Economic Advisor Larry Kudlow has not yet signed up for White House media training: As the U.S. tax payment system failed on tax filing day, Kudlow joked to reporters in Mar-a-Lago, Florida: “Sounds horrible. Sounds really bad. Hope they fix it.” And then he had to apologize to Nikki Haley over a Russia sanctions remark he made. (NBC News)

Bloomberg Insider: BNN Bloomberg to launch in Canada on April 30. BNN will officially launch its new partnership in Canada with Bloomberg on April 30 with a number of groundbreaking initiatives, Bell Media and Bloomberg announced on Wednesday. Bloomberg Markets – a flagship afternoon show co-produced by BNN and Bloomberg available globally and co-hosted by Amanda Lang in Toronto and Shery Ahn in New York – is one of the highlights of the new schedule. Read the official press release here.

The Gun Control Debate Seems Quiet, But the NRA is Facing a String of Defeats in the States (Buzzfeed)
Gun control advocacy group Everytown for Gun Safety, co-founded and funded by Michael Bloomberg, says its priority now is moving onto the offensive. Gun safety advocates are touting a string of state legislative victories that has the NRA on its heels. 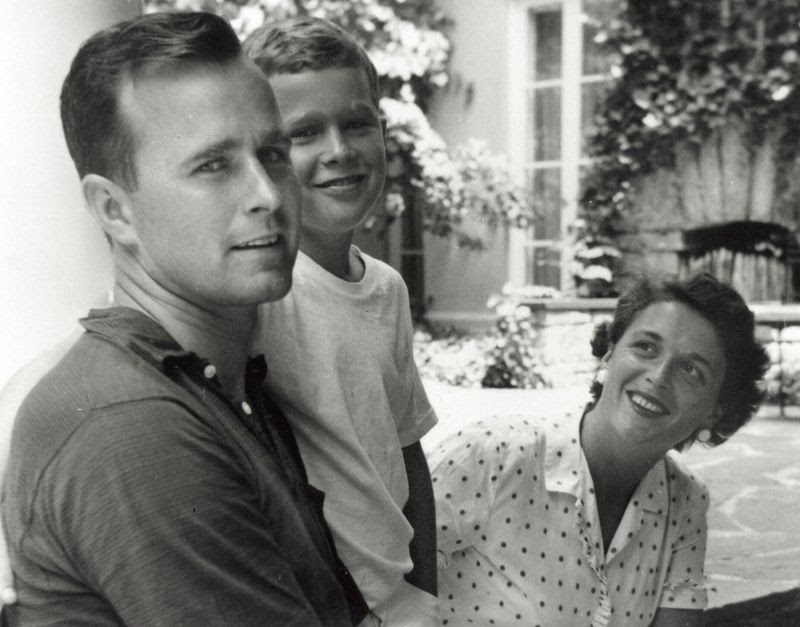 Barbara Bush, Matriarch of U.S. Political Clan, Dies at 92
Barbara Bush, the matriarch of an American political dynasty and the only woman to see both her husband and son sworn in as U.S. presidents, died late yesterday at the age of 92. Bush was known for her sharp wit, fierce loyalty to her family, white hair that she refused to dye and a bluntness that sometimes got her into trouble. “Mom kept us on our toes and kept us laughing until the end,” her eldest son, former President George W. Bush, said in a statement. (Bloomberg Balance of Power)

Mike Bloomberg said, “Barbara Bush was one of a kind: full of grace, determination and humor. Her devotion to family and service had a profound impact on our country. She loved America, and Americans loved her – and we will miss her.”

Japan Times: With Trump golf outing, will Abe find himself in the bunker or on the green?

Bloomberg: India’s ATMs Are Running Out of Cash

China Daily: Why US excuses for punishing China with tariffs are untenable

Yesterday was Tax Day in the U.S., and comedians took it on:

“It’s Tax Day. Of course Stormy Daniels did her taxes. I thought this was interesting: She listed her hush money from Donald Trump under ‘gross income.’”
— Jimmy Fallon

“Some great news for Donald Trump, though: Between the constant firings in the White House, the porn-star scandal and the Russia investigation, he was able to write off this entire year as a total loss.”
— James Corden

“The I.R.S. says they expect to receive 17 million tax returns this week. And get this: They think that one or even two of them may be filled out correctly.”
— James Corden

Former FBI Director James Comey took another shot at President Donald Trump on Tuesday night when he appeared on “The Late Show with Stephen Colbert” where he talked about Trump tweeting at him and compared it to a breakup with an ex.

“He’s tweeted at me probably 50 times. I’ve been gone for a year. I’m like a breakup he can’t get over,” Comey told Colbert. “I’m out there living my best life. He wakes up in the morning and tweets at me.” (Hat Tip: Robin Caiola)