U.K.-based Cambridge Analytica and the company’s use of Facebook data is leading the news here this morning. If you think Facebook has problems in America, it’s nothing compared to the outrage, and likely political and business consequences they face in Europe.

In more positive news, Mike Bloomberg spoke at the first Bloomberg European Capital Markets Forum in our new HQ on Queen Victoria Street where we welcomed the CEO of Credit Suisse, the Director-General of CBI (Confederation of British Industry) Carolyn Fairbairn and former U.K. Chancellor of the Exchequer George Osborne among many others.

The dot plot is dividing economists. All are betting on a hike but Goldman Sachs and JPMorgan see the rate path changing to show four increases in 2018, while Bank of America, Barclays and TD expect the Fed to stick with its projection of three. Morgan Stanley predicts Jerome Powell will keep the status quo with a “hawkish tilt.” BofA says FX “risks look skewed USD-bullish.” (Bloomberg Daybreak)

Trump Ignores National Security Warnings: President Trump did not follow specific warnings from his national security advisers Tuesday when he congratulated Russian President Vladi­mir Putin on his reelection — including a section in his briefing materials in all-capital letters stating “DO NOT CONGRATULATE,” according to officials familiar with the call. Trump’s National Security Advisers Warned Him Not To Congratulate Putin. He Did It Anyway (Washington Post) 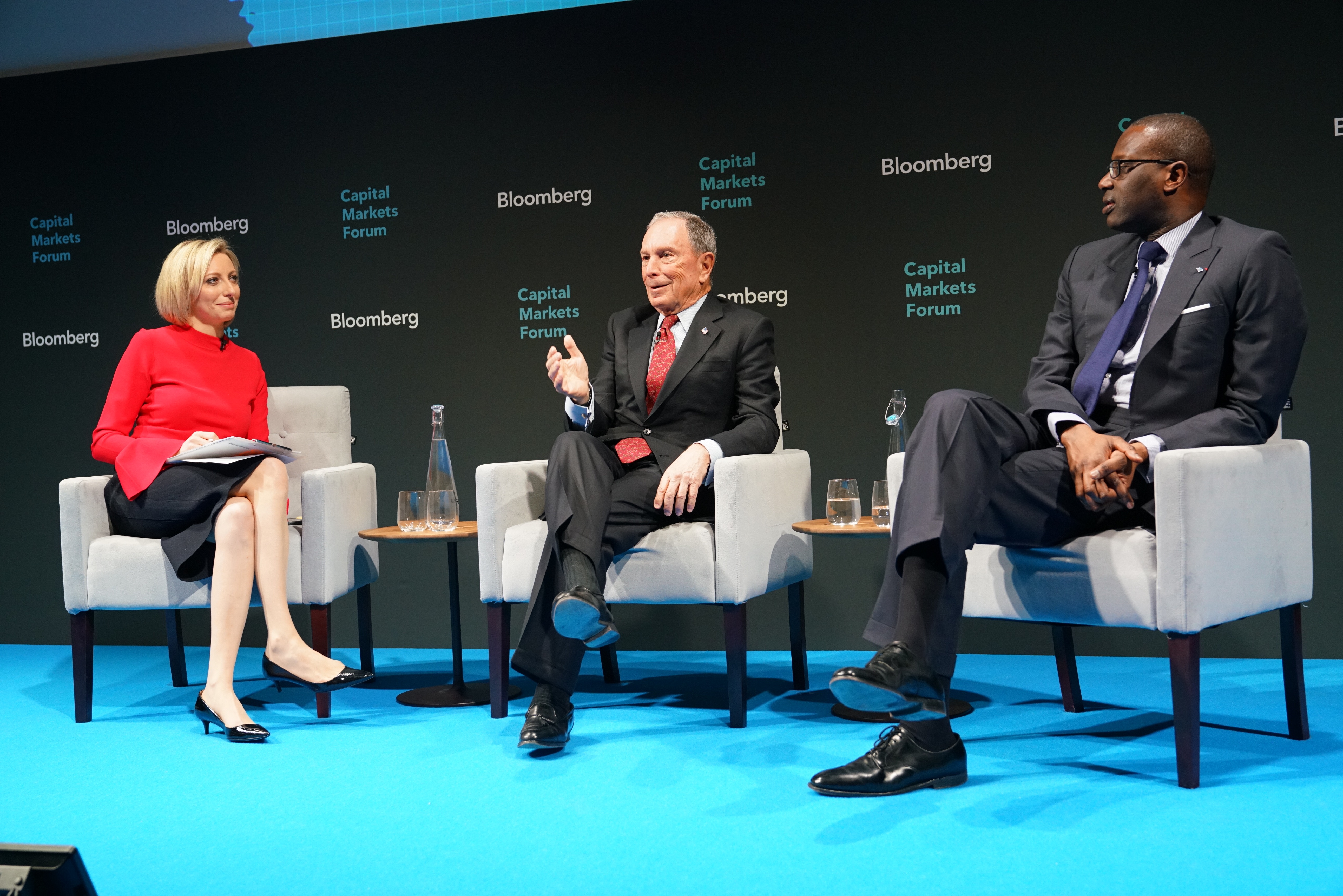 Facebook is struggling to respond to growing demands from Washington and European capitals to explain how millions of its users’ personal data could be exploited by a consulting firm that allegedly helped Trump win the presidency. The uproar over Cambridge Analytica has sparked demands from U.S. and European lawmakers for Mark Zuckerberg to address the matter amid scrutiny from regulators.

Bloomberg Businessweek’s cover by Paul Ford: Facebook is Why We Need a Digital Protection Agency

Don’t let facts get in the way of a good story: The old adage “don’t believe everything you read in the New York Post” rings true today after the tabloid reported we are interested in buying Fortune magazine. Nothing could be further from the truth: We have zero interest in buying it.

This apple did not fall far from the tree: Years before Vanessa Trump filed for divorce from Donald Trump Jr., their marriage was rocked when — around the time she was pregnant with their third child — he cheated on her with a contestant from “The Celebrity Apprentice.” Donald Trump, Jr. Cheated on Wife Vanessa with Former Apprentice Contestant Aubrey O’Day (People)

Evening Standard: Republicans blast Donald Trump for congratulating Vladimir Putin on re-election – after being ‘warned not to’

Japan Times: U.N. hears how the Fukushima disaster is transforming Japanese students into agents of change

@MikeBloomberg: Pete Peterson was one of the great patriots and philanthropists of our time, and he was often a lonely voice for fiscal responsibility, when others were kicking the can down the road.

@BloombergCareer: Volunteering and giving back in our communities is a long-standing tradition of Bloomberg’s culture. Here are some highlights from 2017: https://bloom.bg/2GQT1Vn

@Bloomberg: Macquarie CEO, Nicholas Moore, was awarded the inaugural Bloomberg Square Mile Relay Golden Baton by Bloomberg Chairman, Peter Grauer. @Macquarie is the first company in the 11 year series to win three cities in one year — Can they repeat in 2018? #WeRunThisCity

On President Trump’s call to Vladimir Putin:
“President Trump said today that he and Vladimir Putin will probably get together in the not-too-distant future to discuss the arms race. Oh sorry, I misread that. It’s to race into each other’s arms.”
— Seth Meyers

On President Trump’s meeting with Saudi Crown Prince Mohammed bin Salman:
“Establishing relationships with friendly foreign leaders is important for Trump right now, because he needs to build a network of countries he can flee to, when the time comes.”
— Jimmy Kimmel

On turnover in Trump’s cabinet:
“Trump goes through cabinet members like he goes through cheeseburgers and Aqua Net: fast.”
— Jimmy Kimmel

On Facebook’s data breach:
“Facebook had a massive data breach that was connected to Russia. When users heard, they were concerned — but not as concerned as they were when their parents joined Facebook.”
— Jimmy Fallon