And so it goes, President Trump has blown up one historic nuclear proliferation deal just as he is making remarkable progress in establishing another. To paraphrase Churchill, an Iran deal is the worst possible outcome, except for all the others.

Meanwhile here in China, Kim Jong-un has never been more popular. The Chinese press today touts President Xi’s meeting with him in Northeast China as a demonstration that Kim believes China’s influence in the process is vital as China also pledges to advance the peace process. And today, North Korea released three Americans who are now on their way to Washington.

In news you may miss among the chaos, a company tied to a Russian oligarch, Victor Vekselberg, sent $500,000 last year to an entity that lawyer Michael Cohen used to pay hush money to an adult film actress who said she had a sexual encounter with President Trump, according to Stormy Daniels’ attorney Michael Avenatti. It wasn’t the only surprise: AT&T Inc. and Novartis AG also appeared in the report, and both companies confirmed payments to Cohen’s company.

Lastly, as we wrap up this week’s visit to China, we turn our attention to Europe where Bloomberg has picked Amsterdam as a European base for post-Brexit trading and reporting. Bloomberg is committed to London, but like all regulated companies, is implementing plans for business continuity. We do not expect a significant impact on our employees, as initially only a handful of senior roles will be created in the Netherlands. To those I say: “Enjoy the poffertjes!”

Going Dutch: In the event of a disruptive “hard” Brexit next year, Bloomberg will set up a European base in Amsterdam to ensure all its clients are able to continue trading and reporting. Bloomberg’s Ben Macdonald said the company wants to make sure the company’s bank and investment management clients in the UK and continental Europe faced no disruption post-Brexit. Bloomberg Picks Amsterdam For Its Post-Brexit Financial Base (Financial News)

Solar Gains: California is set to become the first state to require solar panels on all newly built single-family houses. The state’s Energy Commission is scheduled to vote today on the rules, which are expected to pass and take effect in 2020. California Heads Toward Requiring Solar Panels on All New Houses (Los Angeles Times) 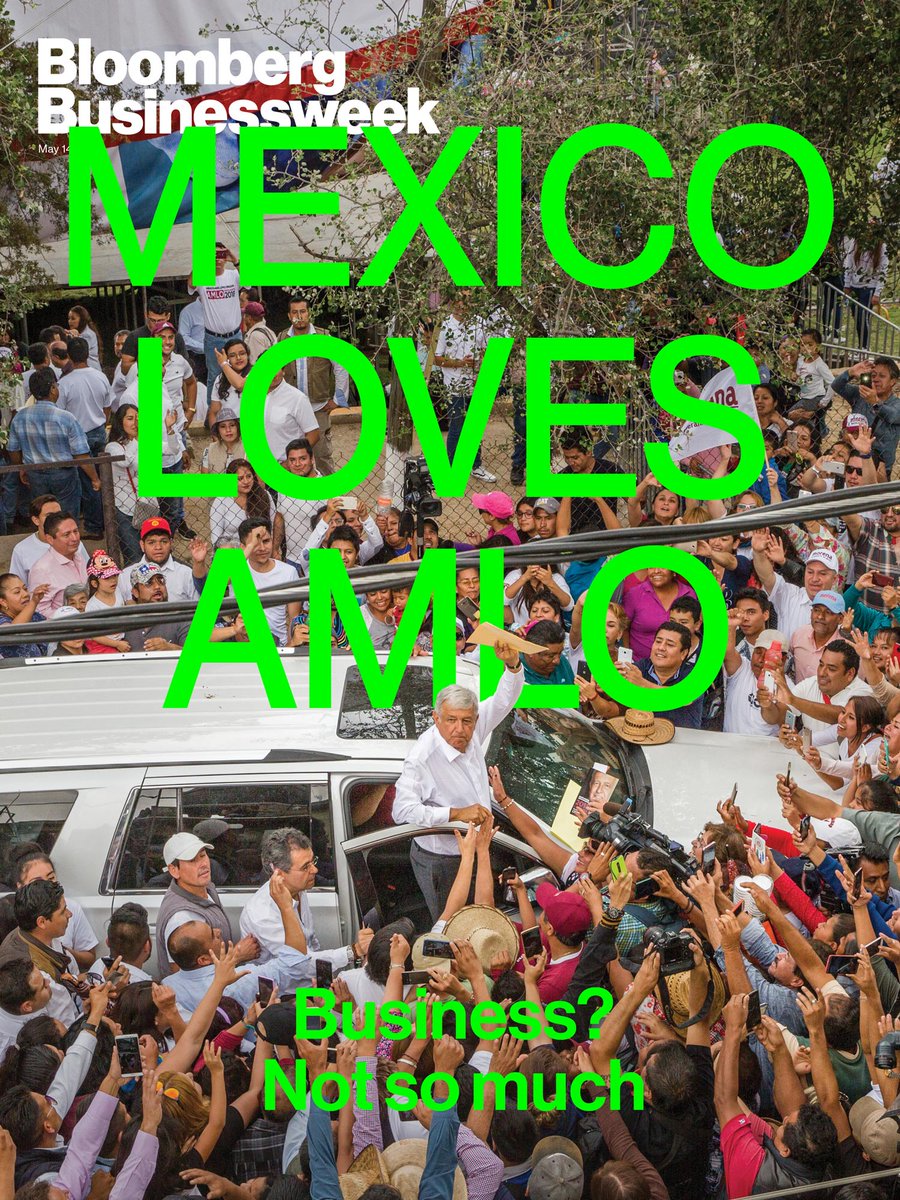 Mexican Election Preview: After two failed presidential bids, López Obrador—or AMLO, as he’s widely known, has emerged as the undisputed front-runner for President of Mexico, enjoying an advantage of almost 20 percentage points over his nearest rival in a crowded field. Investors Hate Mexico’s Likely Next President. So Will Trump. (Bloomberg Businessweek cover)

Department of “Oops!”: Hours before Walmart planned to unveil that it had agreed to buy control of Indian e-commerce giant Flipkart, SoftBank CEO Masayoshi Son spilled the beans to a roomful of investors and journalists in Tokyo. Walmart’s Biggest Deal Ever, Announced by SoftBank’s CEO (Bloomberg)

The Guardian (UK): Theresa May forced to give MPs single market vote after shock defeat

Xinhua: China says it regrets US decision to pull out of Iran nuke deal

@realDonaldTrump: I am pleased to inform you that Secretary of State Mike Pompeo is in the air and on his way back from North Korea with the 3 wonderful gentlemen that everyone is looking so forward to meeting. They seem to be in good health. Also, good meeting with Kim Jong Un. Date & Place set.

@realDonaldTrump: The Fake News is working overtime. Just reported that, despite the tremendous success we are having with the economy & all things else, 91% of the Network News about me is negative (Fake). Why do we work so hard in working with the media when it is corrupt? Take away credentials?

@realDonaldTrump: I will be speaking to my friend, President Xi of China, this morning at 8:30. The primary topics will be Trade, where good things will happen, and North Korea, where relationships and trust are building.

@BarackObama: There are few issues more important to the security of the US than the potential spread of nuclear weapons or the potential for even more destructive war in the Middle East. Today’s decision to put the JCPOA at risk is a serious mistake. My full statement.

@EmmanuelMacron: France, Germany, and the UK regret the U.S. decision to leave the JCPOA. The nuclear non-proliferation regime is at stake.

“I read that President Trump is getting annoyed with Rudy Giuliani’s TV appearances because he keeps going off topic. Trump’s staffers were like, ‘Yeah, it must be really awful having to deal with that.’”
— Jimmy Fallon

“Facebook founder Mark Zuckerberg is funding a major effort to find extraterrestrial life. Zuckerberg said, ‘I truly believe that somewhere out there is intelligent life — whose personal data I can sell.’”
— Conan O’Brien

“Facebook isn’t for finding dates. It’s for finding people we used to date. Then we silently judge them and feel better about ourselves. That’s the only use for Facebook.”
— James Corden