Today’s the day: The Bloomberg Global Business Forum has officially opened in New York, where Mike Bloomberg has convened more than 70 heads of state and 200 CEOs to discuss how global trade can reduce poverty and raise living standards.

In opening the forum, Mike said: “By working together, we can do more to reduce poverty and improve public health. We can do more to protect the environment and promote equal opportunity for women. And we can do more to connect people with new skills to succeed in an economy that is being transformed by new technology.”

In her keynote address, UK Prime Minister Theresa May broke front page news as she pledged to slash taxes to the lowest rate in the G20 to make post-Brexit Britain an economic powerhouse. May said she was committed to forging “dynamic and ambitious” free trade agreements with “old friends and new allies alike.” She then joined IBM CEO Ginni Rometty to discuss open economies and free trade as drivers of innovation and growth. 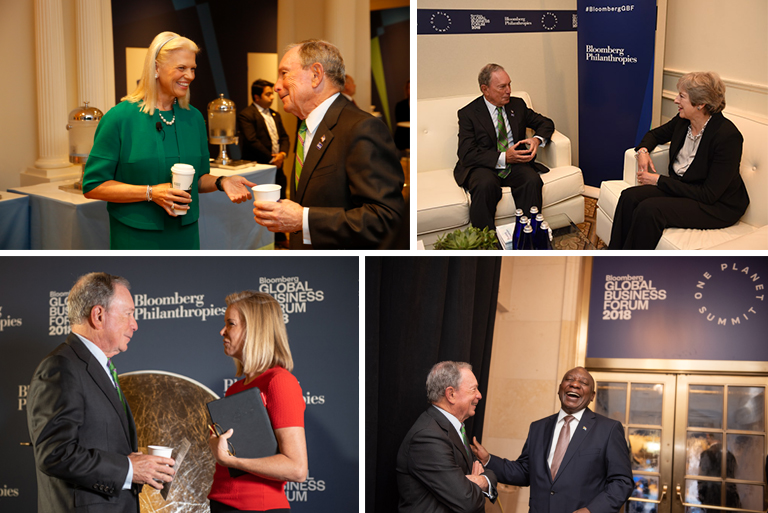 Poll Finds Economic Concern Among Americans: A new Bloomberg Global Business Forum/Morning Consult poll released at the forum found that only 29% of Americans feel the global economy is headed in the right direction, while 47% believe it is on the wrong track. Also, 57% of Americans with a postgraduate degree said globalization has been helpful, compared to 45% of those with a bachelor’s degree and 30% of those who had completed some college.

Climate Today: This afternoon, French President Emmanuel Macron will open the One Planet Summit hosted by United Nations Secretary-General António Guterres, World Bank Group President Jim Yong Kim and UN Special Envoy for Climate Action Mike Bloomberg. The aim of the summit is to accelerate the implementation of the Paris agreement and engage the public and private sector in the race against global warming through concrete initiatives and solutions.

Watch for your next Sheekey Daily Read, which will feature news from today’s events.

Follow live updates throughout the day on Bloomberg Television, the event live feed, on the Bloomberg terminal at LIVE <GO> or on TicToc by Bloomberg. On social media, follow #BloombergGBF for news and announcements.

On President Trump’s speech at the United Nations in New York which, at one point, elicited laughs from the audience:

“Don’t worry, Mr. President, they’re not laughing at you — they’re laughing with each other at you.”
— Stephen Colbert

“Tiger Woods has won his first PGA tournament since 2013. He’s been training hard: He’s been golfing almost as much as the president has.”
— Jimmy Kimmel

On National Voter Registration Day in the U.S., which was on Tuesday:

“The midterm elections are six weeks away, and you have to register in advance. Last midterms, 37 percent of eligible voters actually did vote. As far as I’m concerned, if you don’t vote, you’re not allowed to comment on Facebook; you’re not allowed to tweet; you’re definitely not allowed to stand in line at Starbucks for a pumpkin spice latte.”
— Jimmy Kimmel